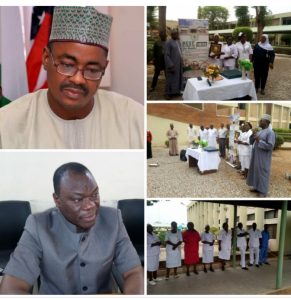 Before the Prof. Auwal’s initiative, Dr. Ali Danburam then a Medical Director of the health facility, introduced end of the year productivity award, where best performing staff, cut across the entire departments and units of the hospital, were identified, using strict assessment criteria, for the annual staff productivity award.

The Dr. Danburam initiative was started in the late 2000 and continued till the termination of his two-term tenure.

The best ward of the month award, is guided by strict assessment criteria.

The selected member inspection committee, is shouldered with the responsibilities of assessing the quality assurance and control, the ACTU and SERVICOM compliance in the wards;

The neatness of nurses, ward attendants and doctors in the wards.

The cleanliness and tidiness of the wards.

Ensuring that everything required for use in the wards are available and duly functional.

The services rendered are effective, efficient and transparently timely.

The human relations, the staff teamwork cooperation and relationship between staff and patients with relatives are not nourishing antagonism and maturing mutual mutiny but friendly for the air about hospitality

The question of expertise, professionalism, diligence, commitment and dedication to duty selflessly, are few among the criteria spelt out for the monthly ward assessment award in FMC Yola.

The winning amounts are said to be utilised getting materials that could add colour to the winning wards with a view to attracting more awards.

The Periscope Global investigate can reveal that the staff productivity initiative, has greatly improved the quality of service delivery and cordiality between and among the members of staff and patients with relatives in FMC Yola.

It is on record that every visitor to FMC Yola, from the ministers to lawmakers, the national and international agencies, without exempting the presidency, commended the teamwork, effective and efficient healthcare service delivery in a serene and tidy environment with attractive landscaping some people from country side are said to have found it befitting for tourism, even if it will mean utilising the visiting hours

The best of the rest ward of the year is identified based on the monthly award to be celebrated.

The Prof. Auwal staff productivity initiative, was started in 2017. The 2018 best of the rest ward of the year, would be celebrated at the banquet hall of the Adamawa state government house Yola on Friday.

meanwhile, the 2019 monthly ward assessment started in January. The award for the month of March was celebrated Tuesday being today.

Dr. Edgar Amos is the head of service Adamawa state. he has directed, about two months ago that the entire ministries should introduce a monthly productivity award with strict supervision.

The Periscope Global Investigate can reveal that to this day, no ministry has keyed in for compliance.

some of the ministries visited have unmotivated staff who come and go at will, not minding punctuality as they also abandon office before closing hours.

“Just ask for stationeries, you can’t get. Isn’t it amazing that we lack as small as A4 or typing paper?

“Subvention is not forthcoming. Where does the head of service want us to source the funds to fund the staff monthly productivity award, from our meagre salaries?”

“The Head of Service directive on the monthly productivity award, is a mere academic exercise lacking a will, backed by dysfunctional system”

They could not go for discordant, however, it were the voices, the responses of some senior staff in the ministries visited who shared their views, considered to represent the anonymous others.