* ARDD, APP and now the defeated ruling party! What a postelection court war! What a drama in Adamawa! – Literary critic 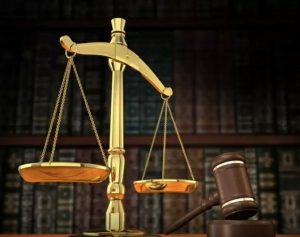 Adamawa State chapter of All Progressives Congress (APC) Thursday, filed a petition at the election tribunal in the state, challenging the outcome of the recent governorship election in which its candidate, Muhammadu Umaru Jibrilla Bindow the incumbent governor lost to the People’s Democratic Party’s (PDP) Umaru Ahmadu Fintiri, code named ATM.

Speaking with newsmen shortly after submitting the petition at the tribunal, the state APC organising Secretary, Ahmed Lawal said, the party formally lodged its complaint against the election seeking justice.

Lawal sought for the declaration of APC as the authentic winner of the March 2019 governorship election in Adamawa state.

Lawal alleged that elections in eleven local councils across the state, were inseminated by rigging, ranging from over voting, refusal to the use of smart card readers and violence to breed illegitimate results, as were declared.

Lawal further alleged that some of their supporters were intimidated and disenfranchised during the voting.

“The party therefore, urges the tribunal to either cancel votes from those local government areas or declare APC winner or order for fresh governorship election in the state.

The organising secretary however, said that though Gov. Muhammadu Umaru Jibrilla Bindow, declined to seek redress at the tribunal, vetoing over, the party under which Bindow contested and was rigged out, decided to petition the irregularities before election tribunal sitting in Yola.

Lawal expressed confidence in the court process, praying that APC would get justice with the available evidence at hand.

Responding while speaking to the Periscope Global reporting politics in Yola Friday, some supporters of the governor elect, from PDP, ADC, SDP and some of whom said, were down-to-earth APC card carrying members, considered the petition against, as a mere fictional imagination meant either for entertainment or purely for academic purpose.

“The petition could count for a dream of the demented who’s shocked by the humiliating, never expected defeat, his principal is recorded to be the first governor to experience a single tenure in the state from it’s creation.

“The defeated governor and the teaming APC stakeholders, have openly congratulated the governor elect, why the backslide by the seeming bourgeois modernist escapists from among them?” The PDP supporters exclaimed.

ARDD’s Rev Eric Thomas known as Dollars, has earlier filed an appeal before the court of appeal, challenging the omission of the logo of his party in the governorship ballot papers thereby disenfranchising him and the electorates he claimed to have lured to his favour.

APP has also registered its petition before court of competent jurisdiction against INEC, for disenfranchising the party, its governorship candidate and electorates, by omitting its party logo on the governorship ballot papers.

A literary critic would ask, in the event that the parties alleged to be disenfranchised by omission, were initially factored into the governorship race, would they have made impressive impact or they are merely serving as backup to smear the success of the race to Dougirei Hill?