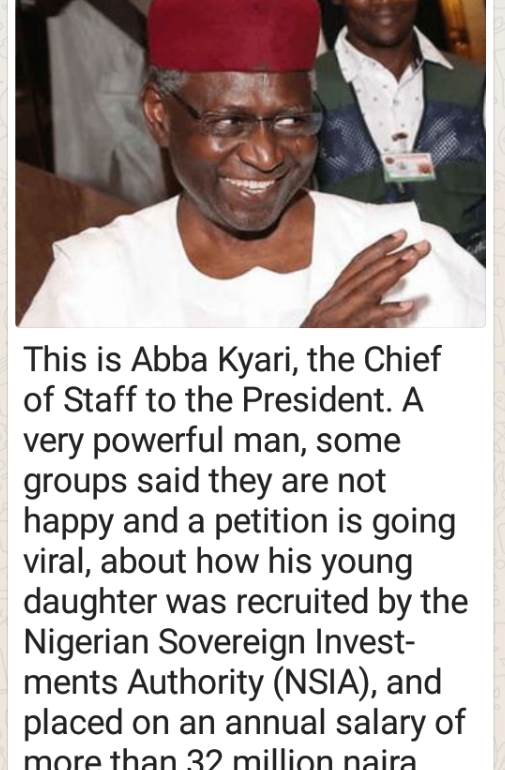 Anti-graft civil society organisation, Coalition Against Corruption and Bad Governance, CACOBAG, has called on President Muhammadu Buhari to order the immediate probe of the alleged appointment of Ms Aisha Abba Kyari, the daughter of his Chief of Staff, Mallam Abba Kyari, as an Assistant Vice President at the Nigerian Sovereign Investment Authority (NSIA).

A statement by the group’s Chairman, Alhaji Toyin Raheem, expressed worry that Ms Abba Kyari’s appointment is considered controversial because it “violates set procedure at the NSIA, which is the legally constituted agency that manages Nigeria’s excess crude oil revenues”.

“According to media reports, the position was not publicly advertised, contrary to what is expected of such position,” the NGO stated, stressing that such practice at the highest level of government runs contrary to the avowed posture of the Buhari administration.

The statement went on: “Equally disturbing is the revelation that the new employee is starting up with an annual package of N32 million.

“We have chosen to call for a thorough investigation of this case because a similar thing happened in Pension Commission recently and at the end of the probe, those involved were relieved of their jobs.”

Presidency rewards driver, 9 others for outstanding performance “Five days after the Abba Kyari employment scandal leaked in the media, neither the Presidency nor the management of NSIA has deemed it fit to deny any of the following claims:

“That: members of staff at the NSIA are infuriated by the appointment;

“That a few of the high-level personnel privy to the recruitment initially refused to interview Ms. Abba-Kyari.