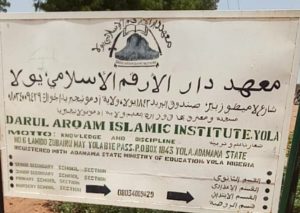 Darul Arqam Islamic Institute,
to have gone for Darul Arqam Academy, Yola Adamawa state, stands as one of the answers to the double edged community constraints associated with moral upbringing, juvenile delinquencies, youth restiveness and secularism that clears ground fitting for Godless society.

There was, some decades ago, in Adamawa state, the agitation by critical religious groups and concerned parents for the inclusion of religious and Arabic subjects in the public schools’ curriculum to have students acquired both the western and the eastern knowledge for a sound faith and moral rejuvenation for societal good.

Having been disappointed for the ignored agitation, added to the growing falling standard of education in public schools, religious groups and individuals, responded by establishing some seeming community in its privately owned base, some purely privately owned, some religious organisation base; these include the churches and mosques base, among others, to factor in subjects, morals and standard that were lacking in public schools.

Darul Arqam Academy additionally, answers the question and challenges associated with the Almajiri schools, for a way forward.

Darul Arqam is credited for directing the path to so many pupils to graduates who have not only committed Qur’an to memory, but are now medical doctors, pharmacists, laboratory scientists, nurses, Engineers, lawyers and media mediators among others, in addition to being good husbands and good wives, enough to establish Alumni.

In order to get the parents involved in the running of the school, Darul Arqam, joining the popular call, established a Parents Teachers Association PTA. The Association should also have leadership for effective mediation, which should be constituted by either selection or election, based on the constitution Bye Law.

The new exco and draft constitution guiding the activities of the exco were ratified by the congress members. This is with a view to enhancing the academic activities as well as ensuring the welfare of students and teachers in the school.

Congratulating the new PTA exco, the school’s management prayed for Allah Subhanahu wata Salsa, to give them wisdom and perseverance in carrying out the onerous responsibilities shouldered on them.