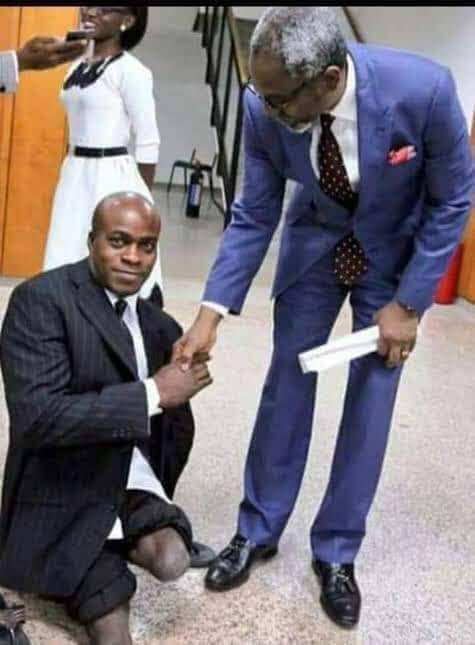 Abdulsalam Idowu kamaldeen, 49 years old, became physically challenged at the age of three (3) due to polio infection. He lost his mother a year after he lost his legs to polio.

Abdulsalam started primary education at age of 8 in 1978 at Erin-Ile, kwara state. He started street begging same year due to financial constraint. Thereafter he finished his primary school in 1993 and left for Lagos, where he found himself on the street begging for alms and sleeping under the Dosunmu bridge at Idumota.

Abdulsalam finished in 2015. He proceeded to the Nigerian Law School, he passed all his papers at first sitting and was called to bar in 2016.

Speaker Femi Gbajabiamila in his former capacity as the House Majority Leader discovered Abdulsalam Kamaluddeen and invited him to the floor of the House in 2017 for Special Recognition by the House.

Presently, Kamaluddeen, a practicing lawyer from Kwara state, though physically challenged, has been appointed as Special assistant to speaker Femi Gbajabiamila on special needs/ equal opportunities.

Speaking with the Periscope reporter, the peace ambassador with the United Nations-POLAC Suleiman Babale Jibril the Barden Kudun Dass commended the new speaker for the new SA appointed surrendered to the physically challenged.

“This is inspiring. The youth without attitude other than begging should learn from Idowu’s rise to fame story in spite of the handicap,” Baraden Kudun Dass said.