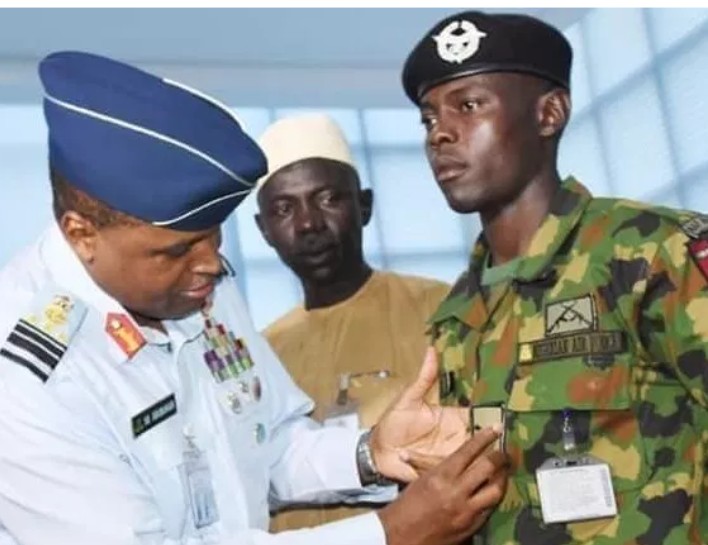 I celebrate Bashir a son of Adamawa who makes us proud – Sen Bindow.

The Nigerian Air Force has promoted Officer Bashir Umar, an indigene Maiha local government area of Adamawa State northeast Nigeria, to the rank of corporal for returning the lost but found 37,000 Euros, equivalent to N14,938,380 to a pilgrim at the Hajj camp of Aminu Kano International Airport, Kano state.

Corp Bashir was among the security agents deployed to the Kano Hajj camp.

“The missing money was enclosed with a GSM number, which Bashir used to identify the owner who was a pilgrim.

“The pilgrim was surprised that his lost but found money was intact. He commended Officer Bashir for his integrity and called on the federal government to honour the young Air Force Officer,” a pilgrim official told our reporter in Kano

Officer Bashir was from a financially disadvantaged parental background but disciplined with faith; integrity and commitment. His father Malam Umar popularly known as Yobe, a, is a renowned tea master who also sales fried yam with eggs and indomie in Maiha Market.

When Bashir was recruited into the Nigerian Air Force about two years ago, his father reminded him of his plural representational responsibilities to make fame rather than putting to shame.

“You’re a Muslim, your conduct must reflect the faith you professed; The Sunnatic spirit you exhibited as a member of the Aid Group of Izalatul Bidi’a Wa Iqamatussunnah should also be a reinforced guide. There’s honesty, Maiha is a Madinah model, therefore continue to remain a good helper, a worthy ambassador. We’re your parents, we do not train you to use anything that doesn’t belong to you as this is called theft, a thief is also a liar, a deceitful minded, so don’t be a liar. If you’re sincere, even the corrupt will recommend, commend and hail you. Prayer very often may Allah SWT bless you and protect you from Satan’s web as you work,” These were conceived to be the sermon from a caring father to the obedient son recently recruited to serve his country the military way.

In a statement signed by his Senior Special Assistant on Press & Media Affairs, Martins Dickson, Senator Jibrilla said Corporal Umar has brought pride and honour to his parents and the people of his senatorial district of Adamawa North.

“May I also congratulate Mallam Umar and his wife for training Bashir in a good way and instilling in him good character and rare virtue, we must all ensure that our children receive the best in character development”.

“I am elated to learn that an indigene of my state and constituency Bashir Umar has displayed strong character, discipline and honesty that has brought honour to the people of Maiha and Adamawa state at large. We have always encouraged the youths to follow the path of honour, Umar’s discipline and honesty is evident that the younger generation are beginning to heed to this priceless advice”.

Jibrilla added that Umar has become a worthy example to the youths of Adamawa state and the nation for standing on the side of truth in a time when materialism has overwhelmed the people especially the younger generation.

Senator Jibrilla ceased the opportunity to call on the youths engaged in the unpopular crime of internet fraud popularly called 419 or Yahoo-Yahoo to desist and follow the path of honour by learning from Bashir Umar.

Senator Jibrilla also thanked the Chief of Air Staff Air Marshall Sadiq Abubakar for recognizing the rare virtue of Bashir Umar and for promoting him to the rank of Corporal in the Nigerian Air Force.

In his words “The Chief of Air Staff has displayed good leadership trait aimed at encouraging high moral standard and discipline within the Air Force by swiftly promoting Bashir Umar to a rank that will ordinarily take him 10 years to attain in the Air Force”.