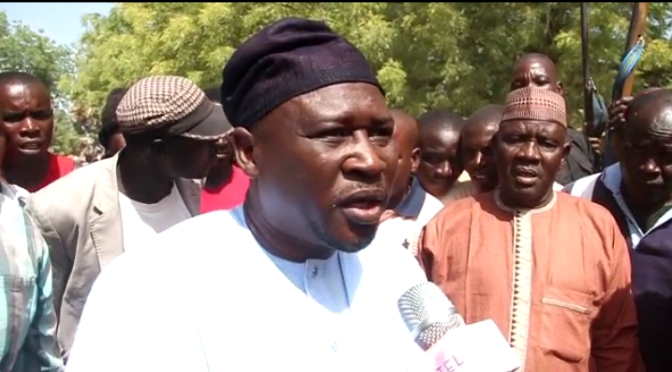 What could have generated the insinuation? Was Shall the sacked ADSU VC facing corruption charges before the EFCC, lobbying to be reappointed to continue ruining by reuniting, with those whom they reigned over the institution in corruption?

The university Dons with ADSU Mubi did not make any second thought, condemning any dream of another reign of Shall as simply appalling, owing to the devastation occasioned by the ineptitude alleged to have characterised his leadership. The insinuated news was therefore recieved with mixed feelings.

The Finder news online, reporting a civil society group known as Coalition against Financial Crimes and Injustice CFCI, has called on governor Fintiri of Adamawa “not to consider the former sacked Vice Chancellor Adamawa state University ADSU Mubi, Prof. Joshua David Shall and the former sacked bursar, Kumthy Ezra Anjili, for any appointment in the institution pending the determination of the corruption case before the Federal High court in Yola.”

The group led by its chairman Alhaji Mohammed Dogo, in a press briefing Thursday in Yola, advised that by appointing people facing allegations of corruption, the credibility and integrity of the Fintiri led administration as being intolerant to corruption, as was conceived by his supporters, would be eroded.

“We are giving this advice because our organisation believes in the administration of Fintiri who promised to fight corruption, corrupt practices and entrench truth, justice, honesty and integrity.

“We advise that the governor should appoint the next Vice Chancellor of the university in a manner that will ensure he does not become a liability to the government and/or dent the image of the governor,” Dogo said.

Recall that the Periscope investigative report published on February 16, 2017, with the title; Inside ADSU Mubi: Dearth of Ph.Ds and State of Emergency on Health, Education in Adamawa,” profiled Shall/Kumthy sojourn, read as follows:

“Prof David Joshua Shall was the fourth Vice Chancellor, his administration was said to be pencilled down for wanton corruption and diversion of school’s property.

“Shall was eventually said to have been nailed down in EFCC’s net following a petition said to have stemmed from the left wing radicals among the Marxist inclined lecturers who stood tall in spite of the challenges posed by the bourgeois modernist escapist, the backsliders with hypothetical tenacity in any form of struggle aimed at liberation and institutional sanity, said to be sympathetic to Shall among them.

“Prof Shall with other cosmetic elites as stakeholders! Sorry, the seeming partners in corporate corruption, merely took advantage of the insurgency period to have themselves enriched by looting in personalising the school’s facilities.

“The supposed fetishist untouchable rather corrupt indispensable bursar, called Ezra Kumthy, has had his Waterloo joined in the Tsunami that swept Shall with others out of ADSU Mubi,” a social commentator articulated.

The Finder recalled that the EFCC slammed three count charges against the trio of Professor Shall David Joshua, a former Vice Chancellor, Mr. Kumthy Ezra Anjili, a suspended Bursar and Mr. Friday Pwanahomo, a staff of the Bursary Department of ADSU Mubi.

The three count charges against the defendants were:

“That you Shall David Joshua, Kumthy Ezra Anjili and Philip Pwanahomo, sometime in December, 2014, at Mubi, Adamawa State, within the jurisdiction of this Honourable Court with intent to defraud did agree amongst yourselves to commit a felony, to wit, stealing money from the coffers of Adamawa State University, and thereby committed an offence contrary to and punishable under section 516 Criminal Code Act.

“That you Shall David Joshua, Kumthi Ezra Anjili and Philip Pwanahomo, sometime in December, 2014, at Mubi, Adamawa State, within the jurisdiction of this Honourable Court, with intent to defraud did steal the sum of twenty four million, nine hundred and seventy three thousand, five hundred and thirteen Naira Eight Kobo only (N24, 973, 513.08) from the coffers of Adamawa State University by making fraudulent withdrawals from Zenith Bank Account Number 1010991218 contrary to and punishable under section 383 (1) and 390 Criminal Code Act respectively.

“That you Kumthi Ezra Anjili, sometime in the month of November, 2014, at Yola, Adamawa State, within the jurisdiction of this Honourable Court, with intent to defraud Adamawa State University, to the tune of Seventy two million one hundred and thirty Eight thousand eight Naira (N72, 138, 008.00) did severally forge the signature of one Dr. Moses Zira Zaruwa, a co-signatory on Zenith Bank counter cheques with Account Number 1010991218, contrary to and punishable under the Advance Fee Fraud and Other Related Act 2006 respective,” the Finder reported.

Prof Moses Ochonu a Nigerian in Diaspora, articulated that corruption and the corrupts are of syncategorematic or hierarchical consideration.

“While some are secretive in their corrupt dealings, covering their tracks and hiding behind multiple layers of concealment, others are brazen and in-your-face,” Ochonu would argue.

The latter in tune with the shameless abuse belonged to Shall/Kumthy category. The duo are not therefore, deserved of any financial trust or leadership consideration. The civil society group would articulate