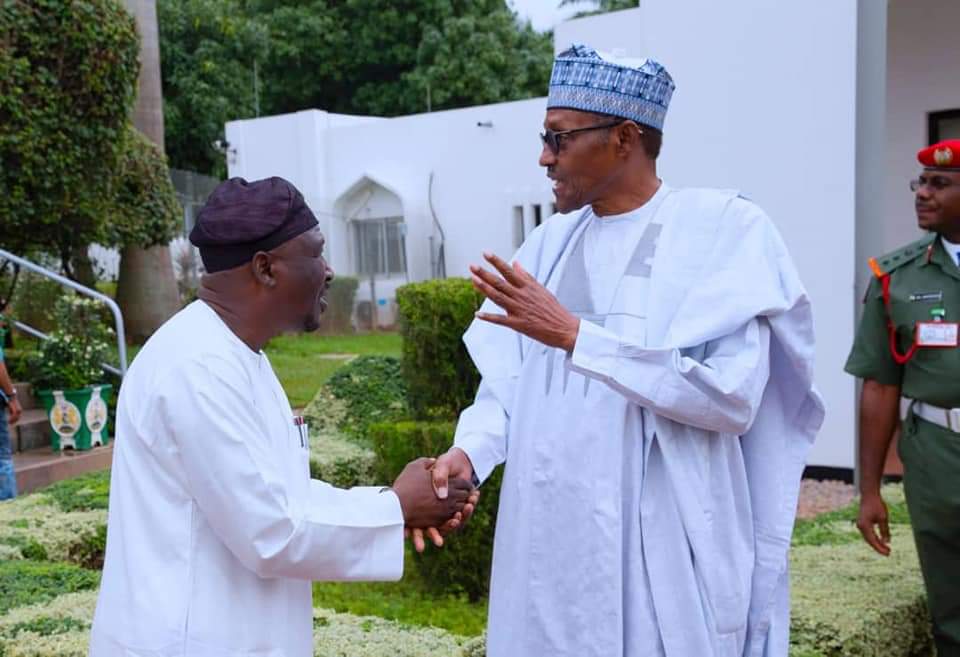 The solidarity visit to President Buhari is a delegation of all Adamawa stakeholders, irrespective of one’s party – Kumangar

“Fintiri indeed deserves an Excellency’s excellent. There’s no better for solidarity visits by the state governors than now when the politically motivated, are conspiring against the country in the name of revolution”

The leadership of the All Progressives Congress (APC), the major opposition party in Adamawa State, appeared to be jittery over the visit by the Adamawa State Governor, Rt Hon Ahmadu Umaru Fintiri in company of stakeholders beyond party bounds, to President Muhammadu Buhari, not to be completely fizzled out of the system, the Adamawa Progressive Forum led by Kamal Mohammed revealed to the Periscope reporter Thursday.

Kamal, while displaying the displeasure to the development made by Mohammed Abdullahi the state APC publicity secretary that Governor Fintiri must not visit President Buhari, having belonged to different political parties and that PDP as a party, used to attack APC Bihari’s policies.

“They should tell us exactly what they meant for a solidarity visit to president Buhari. Their actions in the state are never reconciling with their plan visit of solidarity. You cannot be attacking the policy and the government of the president and still tell us you want to visit him in solidarity.

”Are they planning to come back to APC? Let them come out in clear terms to convince us.” Abdullahi said

Barr Shagnah Moboyefe the APC state legal adviser, was also quoted as saying that in an ideal situation, the visit was never a problem, especially when it would be about good governance and not party affairs.

Moboyefe however, argued that the PDP in Adamawa state has not displayed her wining elections as a victory to everyone in the state other than casting aspersions and making mockery of APC and Mr President by tearing down any erected billboards with President Muhammadu Bihari’s photos or inscriptions.

“This is purely hypocritical, after destroying properties of APC and all billboards with President Buhari’s images or inscriptions ,and now saying that they are going for a solidarity visit. You can’t stripe me naked in the market and expect me to be happy.” Moboyefe said

Moboyefe accused the state Chairman of PDP, Barr AT Shehu for raising a weighty allegation against President Muhammadu Buhari in view of the ongoing legal tussles at the election tribunal, alleging that the presidency was interfering on the case.

“I’m really confused. Solidarity for what? Are they saying that now they have confident on president Buhari who they have earlier castigated?” Moboyefe asked.

The Adamawa Progressive Forum led by Kamal Mohammed, argued that the State APC reaction on governor Fintiri with stakeholders’ visit to the presidency was not a constructive reactionary but diversionary, intended to cause dissension, thereby reducing the state to permanent retrogression.

“It’s a conspiracy of the allied aliens against progress and development in the state. The never-meant-well to the state ought to know that party politics ends after the swearing in. Irrespective of the party, once a leader is elected, he’s for everybody and nobody. It is called governance.

The group revealed that these were the same allied aliens against the state that misled Bindow led government; opening a window, not for fresh air but diversionary against development and causing dissension; becoming antagonistic to the Monarchs and the monarchies, to elderstatesmen and stakeholders and eventually, dumped him into the deep pit of defeat to be feasted by humiliation.

“Governor Fintiri indeed deserves an Excellency’s excellent. There’s no better for solidarity visits by the state governors than now when the politically motivated, are conspiring against the country in the name of revolution,” the group recommended

Corroborating the Director General communication and publicity to Governor Fintiri, Mr Solomon Kumangar said that the visit was purely at the level of governance not party politics for which Mr President was the father to everybody including his supporters and those in the opposition; adding that the visit was in the interest of Adamawa state.

“What is taking the Governor to President Buhari is an issue regarding Modibbo Adamawa University of Technology (MAUTECH) Yola, the only federal university in Adamawa and the issue of insecurity affecting the state.” Kumangar assured.

Kumangar has called on the politicians in the state to stop politicising issues of popular interest, arguing that for the state to get to develop, the citizens should have to eschew “bad belle politics”.

”Either we like it or not, today the governor in place is a governor of APC, PDP and even non partisan politicians.

“I’m appealing to them to be objective in their views to develop our state, I want to tell you that the solidarity visit to President Muhammadu Buhari, is a delegation of all Adamawa stakeholders irrespective of one’s party.” Kumangar said