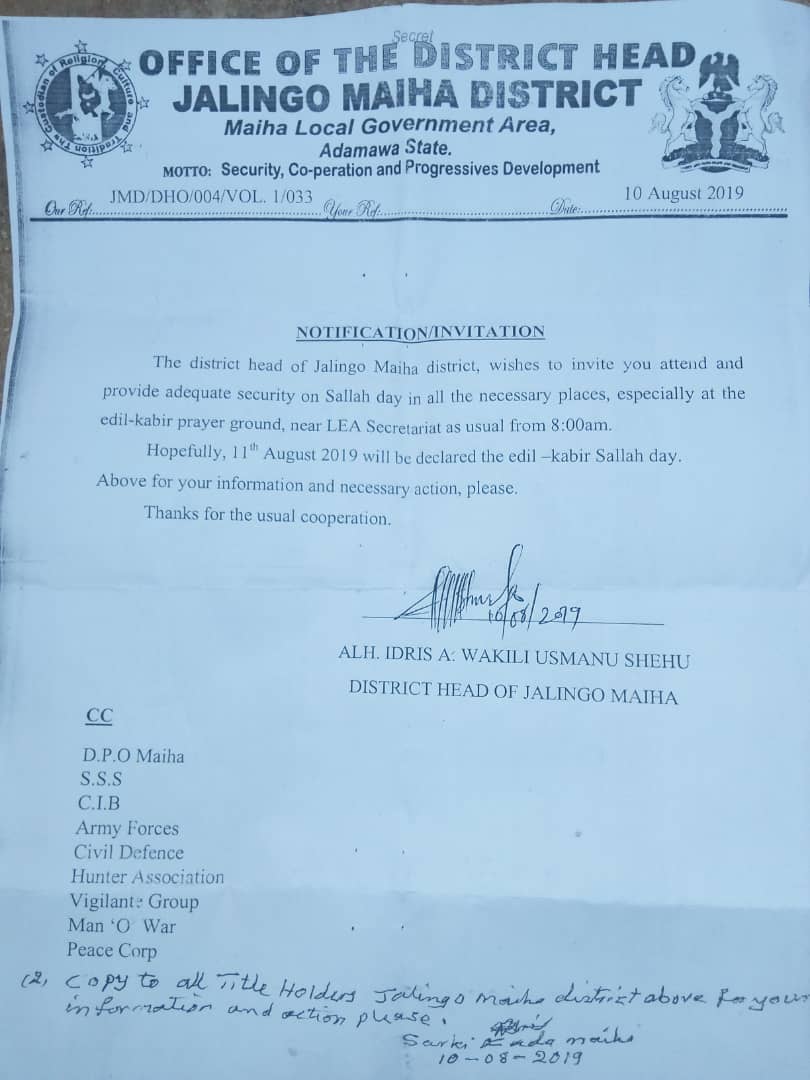 Idris Wakili Shehu Usman has made all arrangements and directed security agencies to ensure his safety on Eid El-Adha day, he would be leading as the district head of Jalingo-Maiha District, Adamawa state, northeast Nigeria, in spite of the court order and governor’s directives against his moves.

Idris was said to have been officially served a letter, approved by the governor of Adamawa state, restraining him from parading himself as a District Head, following the June 18 State Executive Meeting.

Idris supporters claimed that the letter of restraint would only take effect after Barr Mahmud Abubakar Suleiman the legitimate District Head of Jalingo-Maiha District must have been served a letter of approval for which it would never be.

About a year ago, in a declarative judgement, a Yola High Court has ordered the governor of Adamawa to approve the appointment of Barr Mahmud Abubakar Suleiman as the district head of Jalingo-Maiha.

The judgement has equally restrained Idris Wakili Usman Shehu from parading himself as district head.

Having been briefed about the district headship tussle in Jalingo-Maiha district and the court ruling, by the permanent secretary chieftaincy affairs during the State Executive Meeting held on June 18, 2019, governor Ahmadu Umaru Fintiri directed that court order must be obeyed.

Fintiri said that it was injustice disobeying court order and delaying the approval of the legitimate District Head of Jalingo-Maiha District for close to a year.

Governor Fintiri was generally commended at the SEC meeting for the bold step take to end the crisis associated with the monarchy in Maiha.

Two months after Fintiri’s directives to obey court, Barrister Mahmud Abubakar Suleiman the court approved district head is yet to be served his appointment letter.

Though he was said to be officially served with a letter restraining him from parading himself as district head, Idris still finds pleasure being in romance with the contempt of court.

In a letter dated 10 August, 2019 as the superimposed district head, Idris invited the security agencies and the traditional title holders in Jalingo-Maiha to technically provide cover so that he could without any restraint, succeed with his atrocities for Eid El-Adha celebration.

“Office of the District Head of Jalingo-Maiha

“The District Head of Jalingo-Maiha District, wishes to invite you attend and provide adequate security on Sallah day in all the necessary places, especially at the edil-Kabir prayer ground near LEA Secretariat as usual from 8:00am.

“Hopefully, 11 August will be declared the edil-Kabir Sallah day.

“Above for your information and necessary action please.

“Thanks for the usual cooperation.

The letter was counter signed by an alleged undercover impostor acting as Idris’ Sarkin Fada and sent as “copy to all title holders, Jalingo-Maiha District, above for your information and action please.

Deconstructing the content of the contempt of court letter, Idris could be said to be working on a designed script intended to cause dissension among the citizens and anarchy to the monarchy in Jalingo-Maiha by claiming the district headship for which he is not.

The act could be considered as insurgency against both the law state and the citizens.

There are two Eid praying grounds in Jalingo-Maiha, why was Idi so particular about one and forgetting the other, if he is truly a district head?

“Idris told his supporters that he has obtained clearance from the court and from the state governor, to come an observe Eid El-Adha in Jalingo-Maiha as district head.

“Idris has hired horses from Mubi to intimidate the people of Maiha tomorrow. The horse are kept at Ngulire ward; just close to his house.

“Idris, will apparently not spend the night in his house, not even in Jalingo-Maiha, perhaps for the mob action scare.

“We’re told that governor Fintiri was misled based on the interpretation of the court ruling to have delayed implementation thereof. We don’t however want to believe this to be true.

A man of wisdom in Maiha conjured up that this situation considered to be harbouring insecurity would require fervent prayers.

The wise one conceived that the intention for this was a game against people’s lives, when it would have been intolerable.

The wise one would lament that it would be unfortunate should governor Fintiri, who was known for his toughness against insecurity, remain adamant to what could be considered as insurgency against the law, the state and the citizens.

“Over a year ago, the court judgement ordered for the governor of Adamawa to approve the legitimate District Head of Jalingo-Maiha. The court order was disobeyed.

“Two months ago, governor Fintiri directed that court order must be obeyed. However, a letter approving his appointment as district head signed by the governor is yet to be served to Barr Mahmud Abubakar Suleiman.

“Idris, in spite of the court order and the letter served to him, still enjoys his romance with the contempt of court,” social commentator lamented.

Jalingo-Maiha District should be observing the Eid El-Adha, Sunday without a district head other than the impostor that is ought to be dealt with by the law.