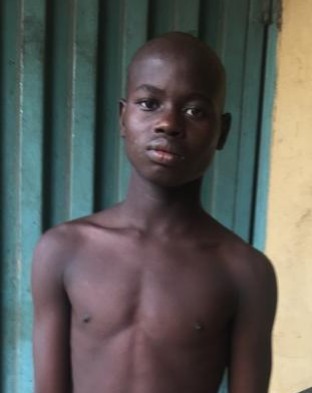 19 reduced to 17 years old Abbati the rapist of a 5 year old girl, is transferred to remand home to evade court case – Informa

A rapist is a criminal whether young or old, must be subjected to stiffer punishment. One is only matured to think about raping – Yapak

The innocent-face-grown-up-youth-without-attitude-rapist of a five 5 year old girl struggling in pains to survive, at a health facility in Adamawa State, Northeast Nigeria, is eventually transferred to remand home to evade facing court case that would send him to prison. A source close to the assailant’s family would reveal to the Periscope.

Who gave the order for the transfer of a near homicidal criminal, awaiting trial from prison custody to remand home, has been what civil society groups and religious bodies been seeking to know. “How lowly is the law slowly denying justice!”

Abbati the rapist is now been freely visited by his parents at remand home, who could have forgotten admitting that their poorly brought up son was 19 years old and have been pleading on behalf of their cruel son to be forgiven of his crime; to have argued that their son has grown up from 19 to 17 years in reverse order by suppression of record.

Abbati’s parents must equally have forgotten that their son has personality confessed to commiting the crime when he was earlier arrested, before they could visit him at remand home to have asked him to deny raping a five year old girl because, as was claimed, he was “not matured enough to think about having sex not go out raping spree.”

Abbati’s arrogant and reckless denial of ever raping anyone, alleged to have been told to do so by his parents, after having confessed to commiting the heinous act, has made the members of the community to reveal how beastly he was for allegedly raping a goat they could not help but to kill and for earlier raping a minor, whose parents have helped in covering the criminal act for fear of stigmatization, before brutally raping a five year old girl the poor parents would not help but to reveal, defeating the conspiracy of silence, demanding for justice.

This came when the Abbati’s parents could not back their apparently flimsy excuse that their their cruel son has been a psychiatric cas as they could not present a medical record to that effect.

A social worker commenting on Abbati’s recent photo, said the muscles suggested the level of his maturity beyond 17 years old.

An informant close to Abbati’s relatives revealed that the reason for Abbati relocating to remand home, was to be able to evade going to court and eventually, to jail, and that when the dust was doused down, the remand home where he was taken as tenant, would be presented with another record indicating that Abbati was really 19 not 17 years. Therefore, he would have no business being remanded at the underaged home, thereby demanding for his unconditional release.

The 5 year old girl who was brutally raped by Abbati and abandoned in the pool of her blood to die like a dog, currently responding to treatment, said to have undergone three sessions of major surgeries, said she has committed the crime against her, the criminal and accomplices to the wrath of God the Most Merciful, never to shower any mercy against the wicked listed groups.

“Those who are helping the assailant also have children, Abbati would pay them a visit while they were sleeping and close their mouths while forcing himself on them.

“Those who have no children, have another means that Abbati would utilise to pounce on them before his final Waterloo to meet a bigger challenge of hell fire in the life great beyond.

Those who have come to my rescue and those who help in fighting against injustice, demanding for what offence I have committed against those supporting my assaulter to cover up his crime, may Allah bless them and announce their victory soon,” Aisha would pray.

Religious bodies, the civil society groups and the human right activists, are all at one in condemning rape cases. They cried out, loudly too that there should not be any cover-up, justice must take its course against the rapist of a five year old girl and others.

Sending behind bar, castration, settling hospital bills and payment of ransom by the assailants, were suggested by the groups waging a war against rapists, the Periscope crime scene reporter interviewed.

A lawmaker representing Verre Constituency at the Adamawa State House of Assembly, Hon Abdullahi Umar Yapak FIBDFM, articulated that “a rapist is a criminal whether young or old, must be subjected to stiffer punishment. One is only matured to think about raping.

“Sending a rapist to jail to be freely fed by the taxpayers money, while the victims of rape suffered the pains of treatment and the relatives paying the hospital bills was not fair.

“The entire communities must rise against the growing reports of rape cases. I’ll soon propose a motion for a stiffer, unpardonable penalty against rapists in Adamawa state,” Yapak earlier revealed to the Periscope reporter.