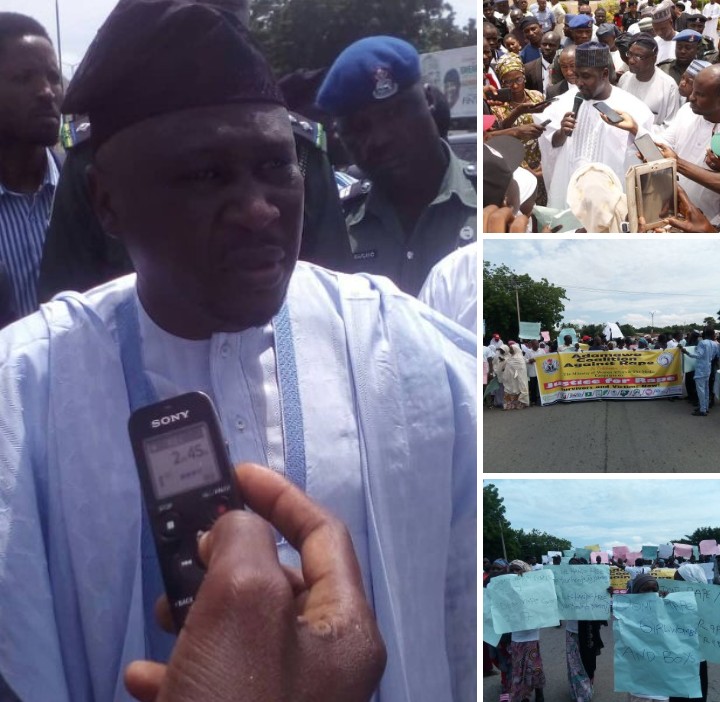 Rt Hon Ahmadu Umaru Fintiri the Adamawa State Governor defined a rapist as a cultist who must face the law however highly placed he claimed to be. The speaker Adamawa State House of Assembly added that capital punishment must be served on the rapists in Adamawa State, the Commissioner of Police solicited for public support to expose the rapist rather than covering up rape cases and the Commissioner of justice assured that there has been stiff penalty for rapists

The governor the speaker and others said this Wednesday, while receiving the members of the Coalition of Civil Society and the media under the aegis of Adamawa Coalition Against Rape, who were on the miles of metres March at the Adamawa State Police Command, the judiciary, the Adamawa state government house and the Adamawa state house of Assembly, in Yola.

Commending the coalition for the selfless struggle to liberate the state from the rapists, Governor Fintiri lamented that it was worrisome what he saw when he visited FMC Yola where a five year old survivor of rape was received treatment and the alarming rate of rape cases in the stat

Fintiri said the Adamawa State government would take stiffer measure against rapists who he summarily said we’re nothing but cultist.

Receiving the coalition, the Speaker Adamawa State House of Assembly Rt Hon Aminu Iya Abbas assured that the house would work on the law that would administer capital punishment on rapists

Abbas said that on receiving the Coalition’s letter, the Adamawa House of Assembly deliberated on the alarming reports of rampant rape cases. 90% of the lawmakers responded favourably to the proposal for capital punishment on rapists.

Abbas said that the House would sit tomorrow being Thursday and deliberate on the list of demands presented by the coalition even though tomorrow was not a sitting day, suggesting the extent at which they attached importance to the coalition demands.

Abbas said, the House would invite the AG to advise on the matter, and their proposed death penalty.

Abbas assured that the House would invite the members of the coalition to attend the seating that would approve death sentence on rapists in Adamawa state.

On the issue of Abbati the youth without attitude who raped a five year old girl currently receiving treatment at FMC Yola. Abbas said the house would invite the Attorney General for explanation as to why the assailant was not transferred to prison as directed by the Adamawa State Governor that assailant was beyond remand home.

Represented by the Deputy Solicitor General, the commissioner of justice commended the coalition assuring that judiciary would work assidously on the rule of law and the legislation that has been in existence, which defined adequate punishment against the rapists.

The Commissioner however said that policemen were not a magicians. It is the members of the public that should give support by exposing rape cases rather than concealing it.

The coalition thanked the His Excellency the Governor and Hon Speaker for taking stiff positions on the rapists and for coming out personally to receive them.

The coalition equally commended Hon Abdullahi Umar Yapak the lawmaker representing Verre constituency of Fufore local government for his support to the coalition’s cause, the Commissioner of Police and the vigilante for providing adequate security.