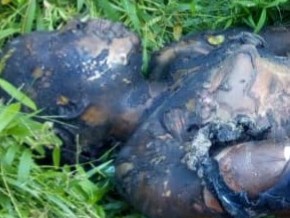 The lady was alleged to have been killed by some male friends who lured her to a night party before setting her upper part ablaze as the source would insinuate.

How was she killed, by poisoning or strangulation, why would her upper part have to be burnt at death?

Who were the killers, how many were they?

Why was she killed, for ritual or settling score?

The questions could be answered by one of the suspected persons who was said to be under arrested.

Efforts to contact the PPRO yielded no result as at the time of the press.