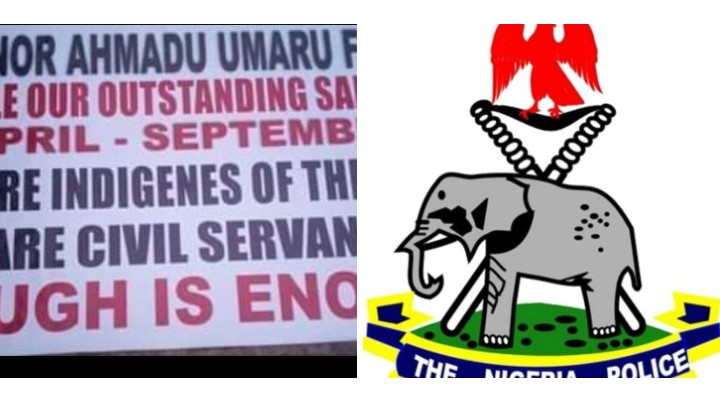 The attention of the Adamawa State Police Command has been drawn over a planned protest by alleged mischief makers intended to disrupt the peace being enjoyed in the state, the command said.

The Adamawa Police Commissioner has in a press statement signed by DSP Suleiman Yahya Nguroje Saturday, advised the peaceloving people of the state to go about their normal businesses, not to aligned with those intended to malign the the peaceful system and not to do that which could amount to breakdown of law and order.

The commissioner advised that whoever could have felt shortchanged, should channel their “grievances through legal means and not to converge on the street, blocking the roads and disrupting the peace of the public. Such will make criminals to highjack the protest and cause violence.

“Members of the public are hereby warned to adhere strictly to this advice as the police will not hesitate to clamp down on anyone who breaks the law,” the Police Commissioner warned.

The press statement was addressed to the news editors with NTA, ATV, TV/FM Gotel, FM Fombina, Weekly Scope and Correspondence Chapel Yola. It would be unprofessional for the uninvited media and/or media group to disseminate the information, the Online media in the state under the umbrella of the North East Online Network NEON, would have thought.

Therefore, for a media mediation, the Periscope crisis management desk, sought to find out from DSP Nguroje, what informed the press release and who were the mischief makers the press release he signed referred to?

Nguroje revealed to the Periscope that the Police Command only acted based on the security report that mischief makers were planning to disrupt peace through street protest in Yola, the state capital.

Nguroje said, the alleged miscreants have not communicated to the Adamawa Police Command and/or any security agency, their intention and reasons for the street protest. It was enough to consider it as being mischievous. It could be hijacked by youth without attitude and the antagonists to peaceful coexistence and eventually, degenerate into anarchy.

Responding to the Periscope’s phone call, the lead convener Faisal Baba said they were law abiding people who would want to engage the state government by registering their grievances in a peaceful protest.

“Sir, there’s nothing nucturnal or uncanny about our intention. We held a meeting yesterday being Saturday, at Lamido Zubairu Hall following the invitation we sent through the media.

“The security agencies; the police and the SSS in their number, were there hours before we could get to converge, during and even after our meeting.

“They have not intimidated us. They have not threatened to stop us from the meeting and they have heard our deliberations. We felt comfortably secured with their presence. If it were to be aimed at mischief, I think we would’ve been there and then arrested,” Faisal said.

Who were the the group members? What was the outcome of the meeting? The Periscope asked.

They were considered as politically motivated Bindow’s last hour employed.

Faisal revealed that they resolved to hold a peaceful protest in Yola the capital of Adamawa state because the RT Hon Ahmadu Umaru Fintiri led government has denied them their salaries for six months.

“The industrial court and the Adamawa State House of Assembly have legitimised the shortchanged as bonafide civil servants of Adamawa but the state government said it was waiting for the reports of the screening committees it has constituted.

“Mr Solomon Kumangar the director communication and media relations to the state governor, has made it public, some weeks previously that the committees have submitted the reports of their findings but the governor is yet to act on it. We’re simply asking why and where have we gone wrong that we are being denied salaries for six months?” Faisal said.

Faisal agreed that they have not formally communicated their intention for the peaceful street protest to the security agencies, because the meeting was held on Saturday being weekend. It was not a proper day for formal correspondences. Besides, the peaceful protest rally was scheduled for Wednesday.

“We have already drafted letters to the security agencies notifying them of our intended peaceful protest, we are to deliver to them on Monday; that is, tomorrow.

“The peaceful protest is scheduled for Wednesday. It might be that the alarm raised by the Adamawa Police Command was not referring to our group,” Faisal said.

On the thought that the peaceful protest could be hijacked by miscreants, hence could degenerate into violence protest, citing an instance with the one held in the state by a religious group barely before the 2019 election?

Some of the group members for the protest assured that they have no intention to block the roads, to cause discomfort to the motorists.

“It’s not a peaceful rally that which infringes people’s right to movement, who’re not part of it. Ours will be a peaceful one. The security agencies can police and monitor it since we’re writing to inform them.

“There’s a peaceful protest rally that was carried out against rape in the state by some groups barely few weeks ago. The well-organised peaceful protest was not hijacked by miscreants for violence. Why should our own be different? The group members asked rather rhetorically.

The Periscope investigation can reveal that the group’s other intention was to seek for divine intervention through fasting and Qunut prayers among other supportive supplications and devotions if the state government failed to respond favourably to them.