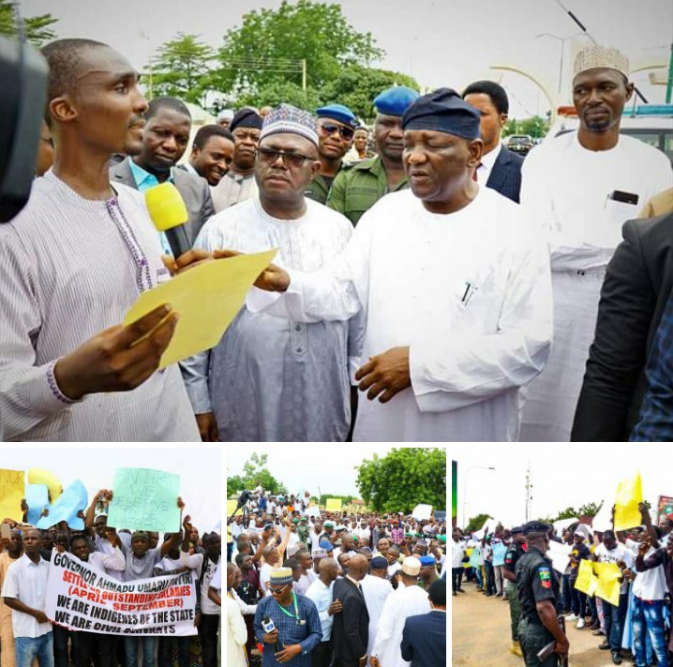 The Nigerian Labour Congress Adamawa State while legitimising the six months unpaid over 10, 000 workers’ walk protest, insisted that the Adamawa State Government must have to pay unpaid workers their legitimate dues.

No government with humane face and compassion, that assured to ensure carrying the civil servants along would have a snoring sleep with over 10, 000 workers with their families, recklessly led to die, as Franz Kafka would in his “The Trial” say like a dog due to deprivation breeding hunger and starvation.

Speaking with a reporter of ABC Yola’s political programme called “Muryar Demokradiyya,” interpreted to mean “dividends of democracy,” the state chairman of the NLC Emmanuel Fashe lamented that the lack of payment of some workers by the state government has dragged pathetically so long.

“Schools are reopened but the workers who’re not paid for six months, couldn’t afford to send their wards to school. Adamawa government must pay the legitimate workers their legitimate dues.” Fashe said.

Fashe denied that the labour union was insensitive to the plight of the workers. Labour ought to have either organised, or joined the protest march and/or even threatened a down tools solidarity in sympathy of the shortchanged from among the union members whose union dues have on monthly basis, been deducted from the source.

“NLC was part of the verification committee set up by the government in relation to the unpaid workers. We ensure that our members are not unduly shortchanged. Sizable number of the affected workers are not even newly employed based on waiver. They have been working for several years. They are only transfered or converted.

“This efforts, I think shouldn’t be translated as insensitivity to the plight of the unpaid workers by the leadership of the NLC,” Fashe who was fished out to flash on the light, flushed away the insensitivity allegation.

Presenting the protest letter to the Adamawa state governor, represented by the deputy state governor in company of the SSG, the Chief of Staff among others, Faisal Baba the spokesman of the unpaid workers expressed dismay over the non payment of six months salaries of over ten thousand workers without any established reason.

Faisal said that the workers have endured for six months waiting for the verification committee, which the government set up to submit reports of their findings and recommendations. Committee has since submitted its report but the Adamawa state government would not implement the recommendations.

Faisal drew analogy with the Bauchi and Zamfara states government, equally the newly PDP captured states; the workers who were said to be employed barely before election, those whose salaries were suspended, instead of being sacked, have had their salaries reinstated.

Faisal has called on the PDP leadership, the political stakeholders in Adamawa and the elder statesmen to hearken to their cries and ask the governor of Adamawa to be responsible in taking the painful but respectful path to justice he signed as a pack with the civil servants of Adamawa state during electioneering campaign. “We’re indigenes of the state that should not either alienation.”

Receiving the protest letter, HE the deputy governor of Adamawa state Crawther Seth assured them of a positive response from the government when the governor he was representing who traveled out of the country has returned.

The unpaid workers on protest walk would not be received by the Hon Speaker and members of the Adamawa state House of Assembly. They were on recess the deputy clerk of the house who received them told them.

The group thanked the lawmakers for standing by them, by asking the governor not to interfere with justice in, by politicising the civil service, exhibiting a worthy representation. The group has called of the legislatures to use their positions and asked the governor to pay them their six months outstanding salaries.

The deputy clerk assured the group that he would deliver their letter when the legislators resumed from recess.

An anonymous community leader who was considered to be an ardent supporter of governor Fintiri and PDP was quoted as saying that the protest walk would not work on the unpaid workers favour.

“They are employed based on waiver barely before the 2019 gubernatorial election. All of them are candidates of APC chieftains who are even alleged to have instigated and are sponsoring the uncalled for protest intended to discredit the government.

This is PDP government. PDP equally has its party chieftains that will want employment for its people. This is simply logical. It isn’t that the state government lacks the capacity to pay workers,” the community leader would say.

Some of the unpaid workers have since seen reason in the insinuation. They revealed to the Periscope that there have been secret employments currently going on in the state

“At the moment, over 300 hundred workers are being employed. Most of them are being data captured and set to benefit the salaries of the month of October. We fear the elimination by substitution system visited on us ,” they said.

“What’s your source?” The Periscope would ask.

“Concrete source,” they would say.

“How concrete? Can I get the source, I mean the record?”

“We believe you’re into investigative journalism. It’s yours to find out whether or not we’re wrong. Its ours to give you the lead, which we’ve just done,” they would say.

“We thank our friends, our families and our parents at home who helped us with prayers. We lack words that can approximately convey our appreciations to the media. You really stood and are standing by us without any prompting.

Speaking on what next after the protest, Faisal said they would give the state government sometimes but not so long, as they have trusted the deputy governor, a man of respect.

“We learned that the governor has travelled abroad. We shall wait for his return. When nothing positive as was promised resulted, we shall embark on mega and continued protests in addition to performing qunut prayers on daily basis to seek for divine solution against a government that has invited poverty to our families and us to death.

“You see, human kinds are created with compassion, to be kind and to show care with sympathy as brothers keepers. The words of wisdom and learning from the experienced and the informed, are the principles of humanity, It’s not for human kind, when given the opportunity of leadership, for one to arrogate to himself the ownership of arrogance because arrogance is a classical characteristic of Satanism. That’s my call sir. Thank you