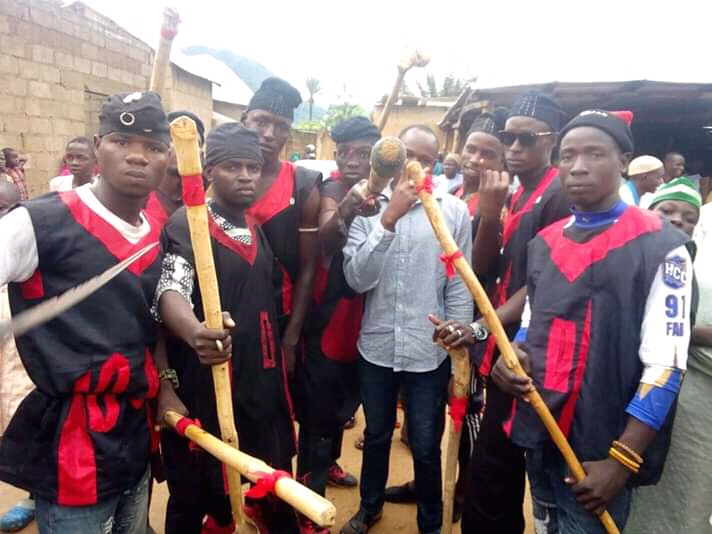 They were sent to Jimeta central prison Yola north local government, Adamawa state, Northeast Nigeria for awaiting trial Friday, following a court ruling. Perhaps to be barred behind bar from causing further trouble desecrating the mosque, breaking people’s heads, houses and shops for what they could consider as booty defining their anarchist kind of monarchy in Maiha.

The offences were disruption of peace in a central mosque, inflicting injuries and breaking shops in mutually coexisting community of Maiha local government, where Wakili Usman Shehu known as Idi the gang leader, equally committed multiple rather unpardonable offences against the state by stubborn refusal to respect executive order, against the police and other security agencies by disruption of peace and arrogant refusal to respond to the security invitations and for continued aggression in parading himself as district head of Jalingo-Maiha he was restrained from and adjudicated as amounting to the contempt of court order.

It was difficult for Idi and three others to meet the conditions that they could be granted bail on Friday and throughout the weekend, the Periscope investigation can reveal.

“Desecrating a mosque is sacrilegious in Maiha. Any person who could volunteer to serve as guarantor to those who desecrated a mosque in quest for power and authority, will by the community, simply be considered as part of them,” a man of wisdom would reveal to the Periscope reporter in Maiha.

For Idi to be able to be granted bail, a First Class Chief or a serving permanent secretary with Adamawa state government, would have to stand as guarantor in addition to depositing the sum of one million naira.

First Class chief! The only possible Emirate to be solicited for the Emir to stand as guarantor is the Mubi Emirate Council. However the Emir of Mubi who initially presented the name of Barr. Mahkmud Abubakar Suleiman to the Governor of Adamawa state for Approval as the legitimate District Head of Jalingo-Maiha and that which Bindow, using the executive coercion as governor, dishonoured by going ahead to appoint Idi as a district head without creating a dynasty other than Jalingo-Maiha that could demystify the quest in a bloodless conquest.

Is there that possibility of luring the Emir of Mubi to serve as guarantor to an impostor who was used as a tool in the name of a stool to humiliate the Mubi Emirate Council?

“No! The possibility isn’t any near with the Mubi Emirate Council, unless the Emir along with his council members are themselves made to vacate the Emirate for those who can tolerate desecrating a mosque to take over,” an elder close to the Emirate Council would reveal to the Periscope reporter in Mubi.

One million for bail could not be hard to be secretly raised by group supporting the impostor as he could eventually payback after being released, if he could have some assets left for sale because the monarchy in Maiha is apparently far from getting nearer for the impostor and accomplices who have been conspiring against moral sensibility “for over three and half decades”.

However, the serving not retired permanent secretary in Adamawa state civil service who hails from Maiha belongs to the family of the legitimate monarchs in Maiha. Is there the possibility of her, even in a dream, to consider serving as a guarantor to the impostor who championed the desecration of mosque, which also resulted in having her cousins sustaining varying degrees of injury?

This could only serve as rhetorical question.

“If it should have to be a serving permanent secretary, then the imprisoned Idi will have to cast for outside help, unless otherwise there’s a window for leniency in the legal interpretation of the categories of guarantors.

For the three others, each would have to present a senior civil servant of no less than grade level 15 and a deposit of five hundred thousand naira each.

“Getting these bail conditions fulfilled, will invariably defines the accomplices to desecrating a mosque during Jumua’t prayer; a sacrilegious act in Jalingo-Maiha,” the man of wisdom would say.

One thing that remains certain is that a legitimate district head of Jalingo-Maiha will never ever champion the course that can result to desecrating a mosque and anarchy in a peace loving community that typifies Madinah and that which will send him behind bar that a barrister will hardly workout the bail; for a jail will be more fitting a home.