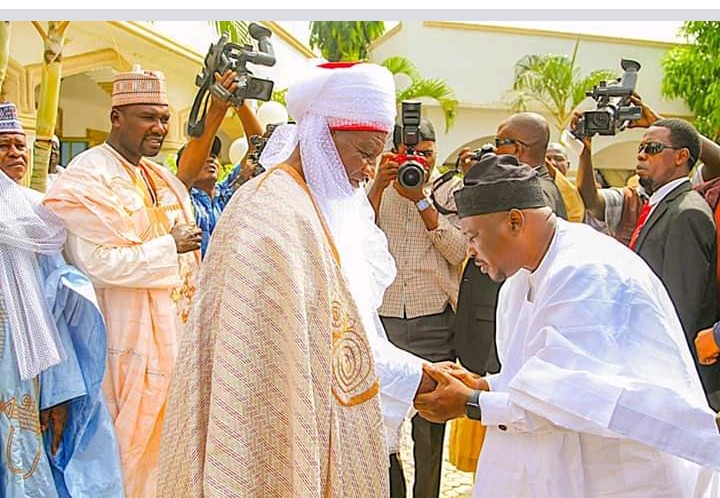 Summary of Governor Fintiri’s Promises In Mubi – The Periscope compilation

* To wage war against kidnapping and other forms of insecurity.

* To construct and rehabilitate schools devasted by the Boko Haram insurgency.

*To build a two thousand capacity hostel in ADSU Mubi

* To facilitate the funding of convocation ceremony in ADSU Mubi

*To build an international market in Mubi****

Fintiri has reassured the Emir of Mubi that repositioning education in the state has been a top priority of his administration. Therefore, in addition to the intervention in capital projects in ADSU Mubi, he disclosed that the state government has already sent consultants to various schools in the zone to assess the level of damages resulting from the insurgents activity so that necessary rebuilding budget would be included in the 2020 appropriation bill.

Fintiri has also reiterated the commitment of his adminstration to complete the projects abandoned by the previous administrations in Mubi in addition to providing other developmental projects, prospects and programmes in the hitherto insurgency devasted zone.

Fintiri revealed that the state government was working with some donor agencies for the provision of potable water to the people of Mubi and environs.

Fintiri has requested for a plot of land from the Mubi Emirate to be sble to build an international market he promised the electorates during the electioneering campaign.

In the area of security in the zone, Fintiri has sent a last warning to kidnappers and other criminal minded persons in Mubi zone that the present administration would be though on them. He therefore, solicited for the support of the Mubi Emirate and the subjects in the sense that maintaining security, law and order is a communal thing; a collaborative undertaking.

In his remarks, the Emir of Mubi Alhaji Abubakar Isa Ahmadu, having thanked the Governor for the visit, assured him of the support and cooperation of the people and Mubi Emirate Council.

The monarch who described governor Fintiri as a man who is not guided by deception and false promises, has called on the entire people in the zone to give the Fintiri led administration the support and cooperation required with a view to actualising good governance.

Fintiri has promised payment of scholarship allowances to students in tertiary institutions before December this year.

The Governor who made the pledge while addressing some students of the university during his visit to the institution, said his administration would improve the welfare of students in the state.

Fintiri said that his administration has given education a priority and would do everything within available resources to ensuring that the university reclaim its status as institution of excellence.

the chairman of the governing counci Alh. Auwal Tukur said his team has already swung into action to justify the confidence reposed in them by the governor to repositioning the institution to its previous enviable status of excellence in the country.

Tukur has applauded the efforts of the governor for making education as a priority, for visit to the institution and the promises made.

Fintiri has also inspected the Mubi water treatment plant undergoing an overhaul. He expressed satisfaction with the standard and progress of the work so far.

Meanwhile, the erstwhile director media and strategy to the erstwhile governor Bindow, Mathias Yohanna, was among those who were disenchanted with the empty promises, translating to no meaning.

The APC stalwart said, it was high time for Fintiri to work the talk and stop talking the work; that everything about Fintiri’s promises ended up in a fantastic deception.

“What can you call what is happening now?
Free education=lie
Free healthcare=lie
Flyover in jimeta=lie
Conversion of College of Legal Studies to Law Faculty= lie
Workers welfare= lie
Security=lie)

“Kidnapping everywhere now in Adamawa. Please tell me one promise that has been fulfilled by this government,” Yohanna threw the challenge.

This challenge can be channelled to the office that holds brief to the governor. However, Fintiri received commendation for addressing the ‘Yan Shilla insecurity, prompt payment of salaries, school feeding system and full payment of gratuities of the hitherto denied retirees in gradual manner