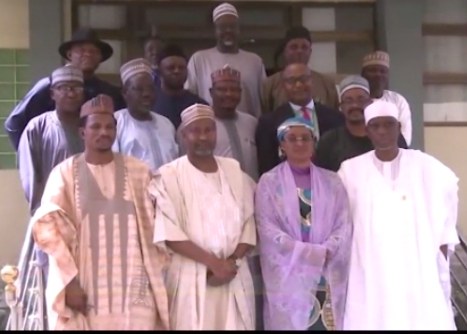 The committee set up by the National University Committee NUC, sequel to the directive of the Senate President, chaired by Prof.Abdullahi Ribadu a visiting Professor at NUC, to review the possibility of setting up a medical college in Modibbo Adama University of Technology MAUTECH Yola and upgrading of the Federal Medical Centre FMC Yola to a teaching hospital, following a motion, which translated to a bill and that which sailed through first reading, sponsored by Sen. Ashatu Dahiru Ahmed Modibbo (Binani) representing Adamawa central senatorial district in the 9th assembly, has submitted it’s report Tuesday, to the Executive Secretary NUC, Prof Abubakar Adamu in Abuja, Nigeria.

The committee recommended that MAUTECH Yola, has the capacity to run a medical college in 2020, FMC Yola waseo equally qualified to be upgraded to a teaching hospital; achieving this would however require about N17.4 billion

“The conversion of the university from a technology university to a conventional university, will require a change of name and a separate establishment bill, as the current Federal Universities of Technology Act CAP F23 LFN 2004, will no longer apply to it.

“The committee estimated the cost implication of mounting the medical programme and requisite facility needed for the college of medical sciences at a total cost of N10,628,987,693,81

“The committee identified the gap analysis, to upgrade the FMC Yola to a teaching hospital at a total cost of N6,804,836,440,” Ribadu explained.

Earlier in his remarks, while receiving the report, the NUC Executive Secretary, Prof Rasheed said “we’re here today to receive the report and our own comment and the report, will be submitted to the Minister of Education and to the President of the Senate for further implementation.”

The NUC secretary has commended the efforts of Senator Aishatu Binani with her colleagues at the national assembly, from Adamawa State as well as the meticulous work done by the NUC committee.

“The implication of what you have done is that Yola may commence medical programme from this year. Other universities in the country who are in similar position who have the desire, can replicate what you have done because of the reverberating effect.

Binani the worthy achiever who has been struggling for the setting up of medical college in MAUTECH and upgrading of FMC Yola to teaching hospital since when she was elected to the Federal House of Representatives, argued that so doing would create more space for admission of students in the area devastated by horrendous activities of Boko Haram insurgents as much as providing solution to unnecessary medical tourism.

Senator Ashatu, disclosed at the event that even though the Bill on reviewing the establishment law of the University has sailed through First Reading in the floor of the Senate, the action would however be accomplished after resumption from recess for Christmas and New Year.

“I’m happy to inform you that with me as the lead promoter of the bill and my other two colleagues; Sen. Ishaku Cliff Abbo and Se. Binos Yero, the bill has long ago passed the first reading,” Binani said

After the meeting, lawmakers interviewed by newsmen explained about the funding of the project not captured in the 2020 budget.

“After the bill is passed properly and signed into law, we will ensure that part of the supplementary budget of the federal government will be considered,” Sen Cliff said.

“We have so many interventions that can be used to fund these projects,” Binani assured.

Commenting, Prof. Auwal Muhammad Abubakar the Medical Director FMC Yola said upgrading FMC Yola to teaching hospital implied that the quality of healthcare would improve. “It is not only Adamawa State, we get patients from some parts of Borno, Gombe, Taraba and in fact from our neighbour; the republic of Cameroon.

Prof. Shehu Iya the Deputy Vice Chancellor Administration MAUTECH, said the university management would be conserned with the admission process of medical students. “Talking about merit. Talking about the educationally disadvantaged states and the consideration of catchment area. The process laid down is very clear and will be strictly adhered to.”

The stakeholders interviewed by the Periscope in Yola, jointly said that it was a welcome development.

“Sen Aisha Dahiru Ahmed Modibbo Binani must be commended. We also applaud the senate and the NUC for setting up a beffitting committee, for the Weldon and accomplished assignment,” the stakeholders said.