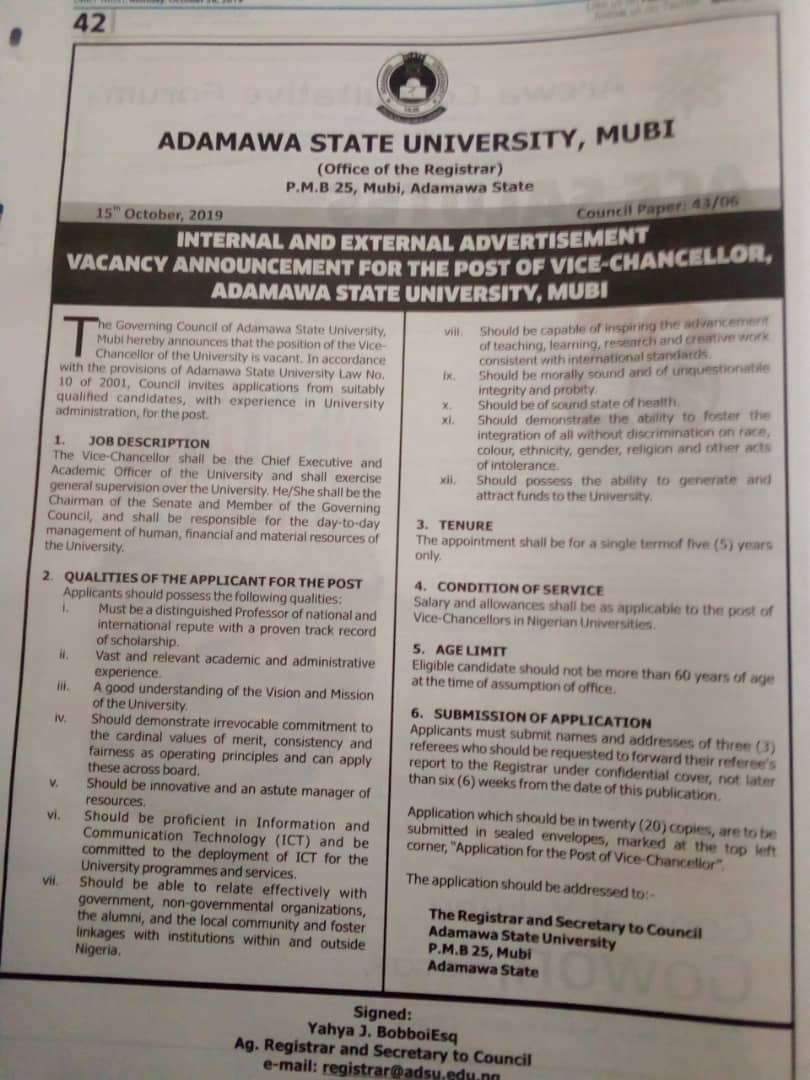 The Adamawa State indigenes based in abroad, having commended the Auwal Tukur led governing council of the Adamawa State University ADSU Mubi for the radical move to get the institution out of the maze occasioned by the administrative inefficiency and alleged corruption, suggested that the first state university in the North East and hitherto one of the best institutions of higher learning in the country would need to have the likes of Prof. Alkasum Abba its one time Vice Chancellor, to be able to restore its lost glory.

“Constituting the governing council of ADSU Mubi to be led by Alh. Auwal Tukur the incorruptible technocratic politician, who has progress and development of Adamawa at his heart, is one move that governor Ahmadu Umaru Fintiri has done to earn a Diasporan credit.

“The radical step taken by the Auwal Tukur led governing council, after having identified the academic mess and aggressive non-compliance to due process and NUC regulations, by way of system study and review, is worthy of applause

“The institution has for over three years, been managed under illegitimate leadership. The placement of advert on the national dailies of the country, inviting qualified and interested candidates for the Vice-Chancellorship of ADSU Mubi, is a welcome development, a process of legitimising the leadership of the institution,” Abdulmumini said.

Honouring the directives of the Auwal Tukur led governing council, ADSU Mubi has on October 15, 2019 placed an advertorial on the national dailies, signed by Yahaya J. Bobboi Esq, Acting Registrar and Secretary to the Council, inviting for applications from interested and qualified candidates for the post of vice chancellor of the institution.

Abdulmumini lamented that Prof Alkasum Abba met plethora of problems. He addressed the challenges squarely; produced Master degree holders and PhDs. With the expiration of his tenure however, the institution went back to its pre-Alkasum crises occasioned by administrative inefficiency and absent of integrity, such that the disenchanted PhDs produced by the institution, simply changed shells.

“Adamawa State University ADSU Mubi is truly in need of another Alkasum Abba.

“There was a Prof. JD Amin like Jibrin Amin the Unimaid has enjoyed to the fullest as VC. There was the Prof. Abdullahi Yusuf Ribadu that FUT Yola now MAUTECH Yola and Sule Lamido University Kafin Hausa, Jigawa state enjoyed to the fullest. Prof. Liman Tukur is currently doing an amazing job with integrity and leadership efficiency as VC MAUTECH Yola. These are to mention just but few kind of achievers ADSU Mubi will necessarily need to have,” Abdulmumini, speaking on behalf of group suggested.