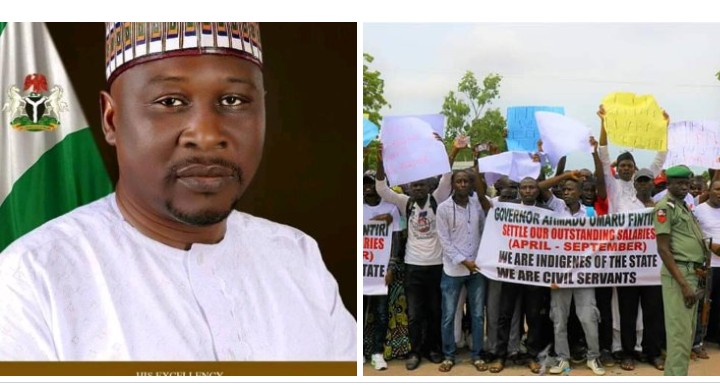 The section of the Adamawa unpaid civil servants whose fate was defined by stand-down and termination of appointment without committing any minor not to talk of grivious offence as they would argue, blasted Mr. George Kushi the newly appointed press secretary to the Deputy Governor, for posting on one of his social media walls that Governor Ahmadu Umaru Fintiri has partially lifted “the Embargo on employment in Adamawa State”.

The group wondered whether there was an embargo on employment in Adamawa state to have warranted lifting and who could have imposed it.

“Has there been any embargo on employment in Adamawa state? Who imposed it?

“The fack that Mr. George Kushi is newly appointed as the press secretary to the Deputy Governor, doesn’t in anyway translated to any lifting of, other than the non imposed employment embargo.

“With the recent happenings; the suspension of workers salaries for seven months and still counting, the stand-down of some staff in State Polytechnic SPY Yola, the announcement of the resolve to drop down permanent secretaries and the termination of appointment in SPY, the sack letter of which will be issued from tomorrow being Friday, are enough to suggest that governor Fintiri is merely lifting embargo on sacking of workers but of employment,” the suspended salary workers cried out..

One of the Fintiri’s social media handlers Thursday, posted on his wall that governor Fintiri would recruit 2,000 teachers in the first quarter of 2020. Could it be the reason for the Kushi’s lifting of employment embargo post?

“Lifting of employment embargo post initiated by Kushi not Kumangar lives much to be desired. It suggests desperation since the report isn’t about or coming from his deputy but the governor himself, unless otherwise there’s a plan to substitute Kumangar with Kushi, for the directorship of media and communication” a literary critic pointed out.