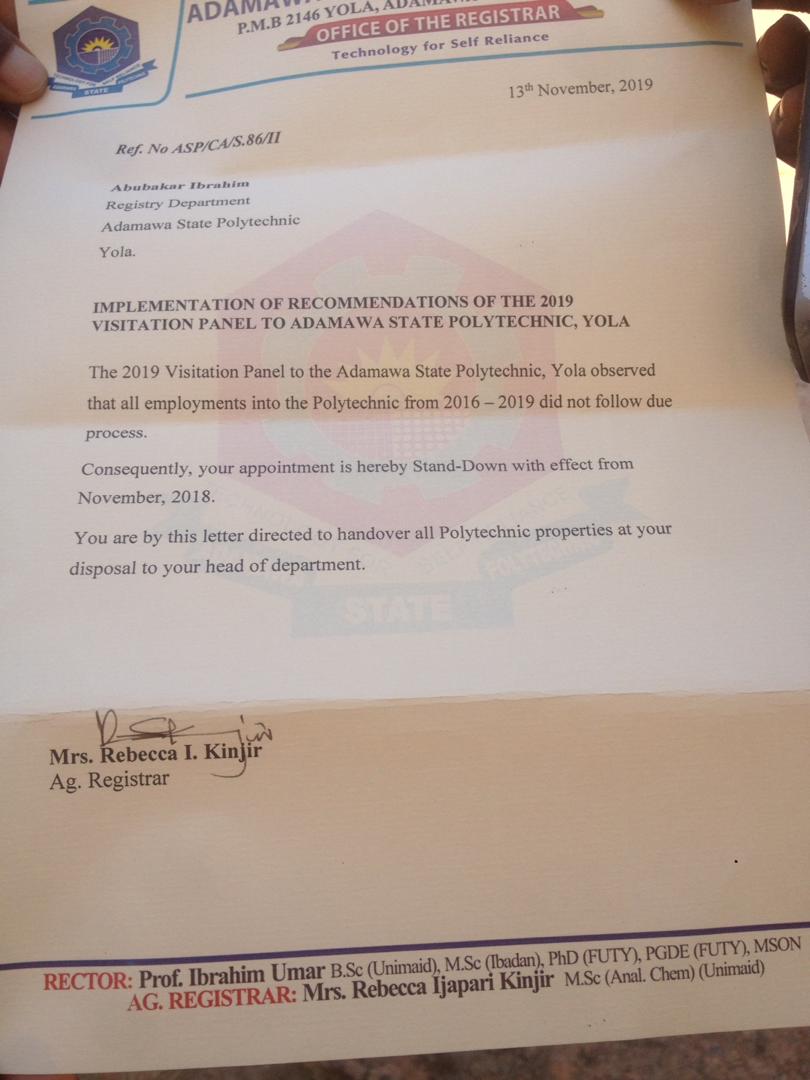 The Adamawa State government Thursday, dismissed some indigenes who were staff of the Adamawa State Polytechnic SPY Yola, gainfully employed between May 2016 and May 2019.

The content of the sacked letters dated November 13, 2019, initiated from the office of the Registrar of the SPY Yola, signed by the Acting Registrar of the institution and served to the affected staff today, suggested that the management of the institution was merely implementing the recommendations of the visitation panel, honouring the directive of the chief executive of the state.

The letters of termination of appointments read in part thus:

Consequently, your appointment is hereby Stand-down with effect from November, 2018.

You are by this letter requested to handover all Polytechnic properties at your disposal to your head of department.”

Some of the indigenes whom the SPY management, would not want to to be in the institution were being served with letters of redeployment to the State Civil Service Commission, whether or not to be sacked for lack of vacancies.

The Periscope reporter sought to know the number of the staff affected by the Stand-down. The SPY spokesman however said he was not privy to the records because the entire exercise was an entire affair of the visitation panel and not the school management’s.

Neither the Polytechnic Rector who was said to be part of the the committee, nor the Acting Registrar who signed the sacked and redeployment letters, was at the institution, the Periscope reporter was told at the registry.

“How can they come to office today being “Black Friday” to the dismissed workers some, of whom they have a hand in their appointments; some of whom were made to pay for the appointment letters ranging from N20,000 to N400,000?” A staff at the registry, on condition of anonymity, alleged.

Some of the workers who were earlier served with the Stand-down letters, which they were told to return back to the institution and have the clauses expunged, have sailed through the conspiracy trap. The constraints of due process, were baptised by certain considerations, the Periscope reporter would not have any of the management staff to explain.

Some of the sack staff interviewed, revealed that they were earlier informed that owing to the faith they are fated to profess, they would furiously and ferociously not be spared.

“The leadership of of a religious group we were told, insinuated that former Governor Bindow employed more Muslims, SPY among other institutions must have to be returned to what they were used to be pre Nyako era; when there were less than 15% Muslims both in terms of employment, appointment and admission.

“The leadership of the Adamawa Muslim Council, could not counsel us or condemn the conspiracy against us because it has given to the activities of this government as being impressive; calling on all Muslims across the state to support by embracing it.

“Can the leadership of the Muslim Council condemn what it conceives, is doing good for the best interest of the state?” The affected staff asked.

“What makes you think that the exercise amounts to translating the agenda of the rivals to your faith, when Muslims are not only those served with the sack letters and why do you think that the Muslim Council can be without impact?”

“Our leaders under the aegis of the unpaid workers walked to the leadership of the Christian Association of Nigeria and the Adamawa Muslim Council to register our grievances for their possible moral intervention. We know what feedbacks we received from the organisations,” the sacked staff said.

Mathias Yohanna, one time media aids to the former governor Bindow; still considered as Bindow’s prominent defensive oracle in the political war with words, instead of changing shells by defection, an unprincipled character definitive of hypocrisy, reamains an ardent critic of the activities of, who has not seen anything fresh air but suffocation and an adulterated due process associated with the Fintiri led government initiative, blasted the Stand-down and the redeployment exercises at SPY Yola, as nothing other than a bludgeoning influence of an unprepared leadership that was motivated by an unconstructive political critiquing.

Mathias simply argued that charity begins at home, as much as correctional measures ought to begin at home, governor Fintiri’s media aid Mr. Solomon Kumangar was also a beneficiary of the Bindow’s alleged without due process transfer of service, for Fintiri to be persuasive, to be believed that reversing all transfers of service and stopping all those that were employed during Bindow,
were not politically motivated, Kumangar’s transfer equally ought to be reversed,” Mathias opined.