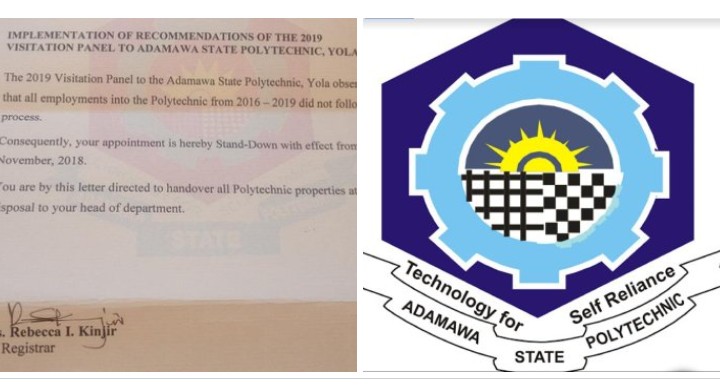 * The termination of appointment of staff in Adamawa State suggests that former Governor Bindow led an illegitimate government even though elected.

Some groups commended the downsizing as being a worthy rightsiziing aimed at cutting the financial cost, weeding out the corrosive corrupt, reducing redundancies, balancing the quota equation based on equilibrium and/or fair faith consideration and checkmating academic rot in the institution.

Some groups have dismissed the act as nothing other than a catastrophic conspiracy ochestrated to lambast and lampoon, catapult and castigate the previous government and castrate the employed who professed a faith even though being the majority in the state.

The contents of the letters that were served to the sacked staff Friday, in Adamawa State Polytechnic SPY Yola, indicated that they were employed between 2016 and 2019 without following due process.

“Consequently, your appointment is hereby Stand-down with effect from November, 2018,” the letter served to those employed in November 2018 read in part.

Those who welcomed the idea of the sacking of staff, argued that the casualties were technically unqualified for the employment.

“There are the lecturers with third class among them. Those who graduated with good grades, the seeming employable, could not defend their certificates as if learning has not taken place. They could not write even acceptance letters after having collected their employment letters, they would have to be guided. Tell me, what can they teach?

“Some of the employed are still undergraduate students, some of them have fake results and some of them at the registry are simply NCE holders who should be in primary or post-primary schools as teachers.

“To bring academic sanity into the system, the unqualified must have to go. The investigation panel has therefore, done justice to that.

“Those who are redeployed to the institution have paid their ways simply because of the pay package. SPY staff enjoy tertiary institutions salary that is better than the casualties’ initial places of primary assignments.

“Above all, the majority of those affected by the stand-down exercise, though hailed from different local government areas, share the same faith. For God’s sake, Adamawa State doesn’t belong to a single religion,” the pro-SPY Stand-Down appointment groups argued.

“Not logic but politics has guided the sacking of SPY staff: A PhD, Master degree holders and impressive number of graduates with upper grades, are among the over 800 casualties of the SPY Stand-Down. Doesn’t this amount to shortchanging the institution?

“The lone Medical Doctor in the school, the lone Director and the lone legal officer, are all affected by the recommendations of the visitation panel that spelt out the bases for the Stand-Down appointments. What can you call this?

“When you talk of cutting financial cost for governor Fintiri to be able to effectively pay the N32,000 minimum wage without tears, without casting for bank loans, why are there secret and silent employments based of Fintiri waivers as are alleged? Why do they say that they’ll re-recruit to fill the vacancies occasioned by the termination of the faith-based appointments in SPY?

“It’s not actually true to say that only those who professed the same faith are affected. This amounts to libel.

“The employment, redeployment, transfer and the stand-down of appointments have affected indigenes of, cut across the state who are either Muslims or Christians and/or who are from the mixed families of both Muslims and Christians.

“It is only natural and fair to have more Muslims employed in SPY. It’s an objective reflection of the demography in Adamawa State; Muslims are the majority in the state, the political permutations, the electioneering atmosphere simply suggest that. To condemn the previous government’s employments based on the faith professed by the employed, will amount to proselytizing the Muslim hate speech, taken as a theology,”
The anti-stand-down appointment groups argued.

The Periscope Factcheck can reveal that more than 800 staff in SPY will be affected by the “Stand-Down appointments” exercise in line with the visitation panel recommendations.

There were some irregularities in the appointments of some of the stand-down casualties; corruption could not be ruled out, even though the executive waiver on employment was legitimate.

Some of the casualties have confessed to the Periscope reporter, on condition of anonymity, to paying some amount of money, ranging from N20,000 to N400,000 to some top management staff of the SPY, principally, the former registrar before being employed. Is the registrar spared?

The allegation of the “politically motivated” sacking of staff in Adamawa, would not have been much of an issue if the inquiry had been restricted to the waivers granted by former governor Bindow for employments, barely few months close to the 2019 gubernatorial election and after the election, as was earlier pronounced by the mouthpieces of and the present leadership.

The ongoing termination of appointment of staff in Adamawa State employed between 2016 and 2019 suggested that former Governor Bindow has led an illegitimate government for the period of four years, even though legitimately elected with a landslide victory in a free, fair and credible election under a peaceful electioneering atmosphere.

What will happen to the salaries enjoyed for years and/or months by the staff who were served the letters that terminated their appointments with effect from the day they were employed?

Have the visitation panel, other committees and the Adamawa State government given this a critical thought?

If a faith based group has not interfered into this matter by means of comments, alleging impartiality based on faith, in the recruitments waivers credited to it, which was alleged to be part of a pact agenda with the present administration, as have been the insinuations, the system review to equally extend to all the state institutions, would have remained excused rather than accused, in the sense that SPY truly needs an objective and honest overhaul; the management that tolerated alleged corruption, should also not be spared, to be able to get the institution out of the maze.

The over 800 SPY sacked staff are among the over 3000 indigenes the Fintiri constituted committees recommended for the termination of appointments, Adamawa State is still threatened by the ‘Yan Shilla atrocities and serial abductions for kill or for ransom and that which even the security men are not spared. Has the government taken any consideration of the security threat associated with this appointment stand-down exercise?