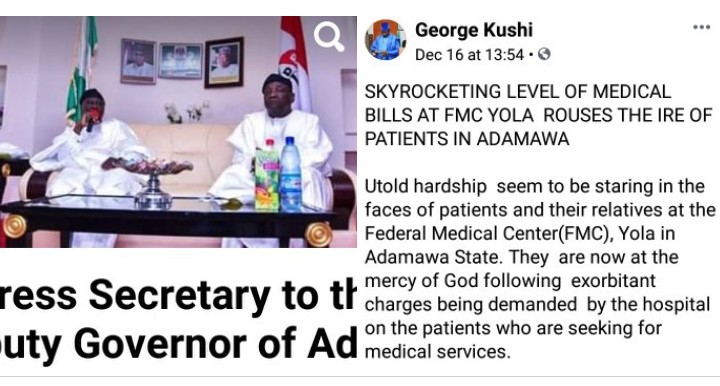 The Adamawa state government represented by the Press Secretary to the Deputy Governor, Adamawa State, George Kushi Monday, accused the management of the Federal Medical Centre FMC Yola of heartlessness against the downtrodden people of the state with the near impossible for the patients to afford medical bills.

The accusation was contained in a press secretary to the deputy governor’s Facebook page report with the caption: “SKYROCKETING LEVEL OF MEDICAL BILLS AT FMC YOLA ROUSES THE IRE OF PATIENTS IN ADAMAWA”

The press secretary, backed by the management of the Scope; Adamawa state government weekly newspaper, reported that “untold hardship seem to be staring in the faces of patients and their relatives at the Federal Medical Center(FMC), Yola in Adamawa State. They are now at the mercy of God following exorbitant charges being demanded by the hospital on the patients who are seeking for medical services.”

The press secretary to the deputy governor disclosed that the patients and relatives lamented that the medical charges in FMC Yola “have become unbearable to the citizens and that already, the situation is out of reach of the common man in and around the state.

“The patients lamented that apart from the cut – throat charges, most of the staff do not take their jobs seriously as there are cases of missing folders which according to them hinder them from consulting their doctors.

“They noted with dismay a situation where the FMC has only one pay point which makes them to face a lot difficulties on the process and called on the relevant authorities to come to their rescue.” The Press secretary to the deputy governor of Adamawa State wrote.

The press secretary’s report concluded with what was considered as response by the MD FMC Yola perhaps, when the Adamawa state government approached him with the issue.

“In his reaction, the Medical Director of the center, Professor Auwal Abubakar denied the allegations, saying that the hospital renders the cheapest services.” The report by the press secretary concluded.

The Periscope’s investigative reporter Marie Ann Jefferson was at FMC Yola on Wednesday, she requested the spokesman of the health facility to react on the issue.

Adamu Muhammad Dodo is the head of information and media relations of the health facility. He said that it was not far from a hate speech, mischievously crafted aimed at demeaning the achievements of Medical Director who has been struggling tirelessly to ensure the upgrading of the health facility to the status of a teaching hospital.

“It’s purely a calculated minority malnourished campaign of calumny, lacking a fertilised ground to mature, other than in the hearts and minds of the retrogressive elements; the narcotised and naughty by nature who nurtured the savage-sentiment thoughts, dreaming in medieval age.”

“I’m happy you didn’t say the accusation was from the SSG or Solomon Kumangar the Director communications to the state governor.

“It’s however unfortunate for the state government to have this kind of quack, who takes hate speech as a theology to evangelise in social media, as a press secretary to the deputy chief executive,” Dodo blasted.

Dodo explained that it was on Monday, a reporter from the scope newspaper, while covering the commissioning ceremony of a patient relatives waiting area, built by Alhaji Mohammed Aminu Umar Mayo-Balwa a philanthropist, which he donated to FMC Yola as a corporate social responsibility, “in a mischievously crafted styled digression, asked Prof Auwal Muhammad Abubakar the Medical Director to comment on what he considered as price hike of medical bills in the health facility.”

Dodo further said that the mischievous press secretary to the deputy governor, backed by the Scope editors, did not relay the honest response of his principal.

“I reacted to it previously. My piece with the title: “The Scope, others take FMC Yola hate speech as a theology to evangelise (I)” was published in different media platforms.

“My MD has explained that patients are not shortchanged. FMC operates a revolving fund scheme in the entire service windows. You don’t expect the hospital to charge patients, fees less than the cost of the procured items and still expect the hospital to render services effectively and efficiently; not to deteriorate, claimed by the decay the state government hospitals have been subjected to, which the press secretary backed by the scope editors do not see as worthy of calling for attention.

“My MD further assured that no patient admitted in FMC Yola that is sent home because he lacks money for the treatment. Hospital Paupers Fund established by the management of the hospital takes care of the situation, including major surgeries.

“We still maintain our position as my MD would say, when you compare our hospital services, with even the surrounding hospitals, you’ll know that our prices are actually given in consideration of the population and precarious financial situation,” Dodo said.