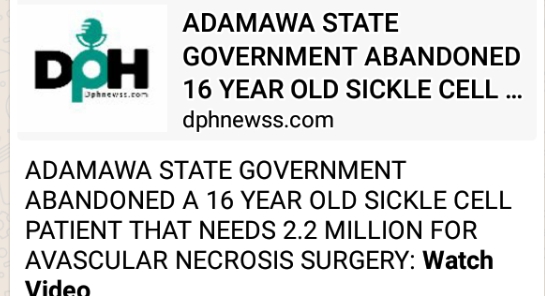 In its publication of December 15, with the caption: “ADAMAWA STATE GOVERNMENT ABANDONED 16 YEAR OLD SICKLE CELL PATIENT,” DPH reported that an indigene of Adamawa state suffering from Avascular Necrosis of the right femoral head a disease condition that affects the hip bone was from an indigent seeking for assistance.

“Ibrahim Shawwillu has been unable to walk properly because the disease has affected his right leg, due to his health conditions, Ibrahim was referred  from Federal Medical Centre, Yola to National Orthopaedic Hospital, Dala, Kano for treatment.

“According to his health report, Ibrahim needs a total hip replacement for both hips which the surgery will require N2.2 million  but the Adamawa State Government doesn’t seem to care or offer its help to Ibrahim who was born and raised in the State and who’s parents are indigenes of the state.

“in an interview with DPH NEWS, a family friend to the patient revealed that Ibrahim has been sent back home from the Dala orthopedic Hospital Kano because the required money needed for the surgery has not been met.

“The call for donation was necessary due to the fact that only N800 thousand  has been raised by concerned citizens and the Nigerian Government especially Adamawa state government of which Ibrahim hails from have not in any way come to his aid,” DPH concluded

Reacting to the allegation in a telephone conversation, the Director General, Media and Communication to the Governor of Adamawa state Mr Solomon Kumangar, told the Periscope reporter that it was a mere hate speech calculated to attract traffic readership; a classical campaign of calumny by a media platform empty of ethical form with malnourished objectivity to be regarded as anything genuine criticism for any consideration.

“This is purely a campaign of calumny. Adamawa State Government is not aware of this case; neither has it been formally notified nor approached to intervene in the matter.

“In fact, there are several referrals, which the Government is addressing right now. This one will also be treated on its merit as soon as it is channeled properly,” Kumangar said.

The periscope investigative reporter tried to find out the authenticity and objectivity of the report but the line given for the DPH editor was not responding to the calls put to it for days, which have caused the delay in the Periscope’s report.

However, speaking with the Shawwillu family, the spokesperson disclosed that they have received a phone call from a certain individual who appeared to be an agent of an international NGO that picked interest in putting the hospital bills for the sickle cell patient having seen the video, he would also facilitate in the wider publicity for global outreach that would lead to a permanent solution.

“He however asked us whether or not we’ve approached the Adamawa state government. We’re poor, we didn’t know how to approach the government to assist, that’s why we’re using the media to solicit for assistance, we told him.

” The caller said, we shouldn’t worry, he would find a way of reaching out to the state government for assistance. The next we would hear was this report for which we as a family, disassociated from. His line is not calling since then. Its unfortunate,” the Shawwillu family lamented.