A 15-year old drug, rape and dump by thugs in Adamawa, for vengeance? For rituals? 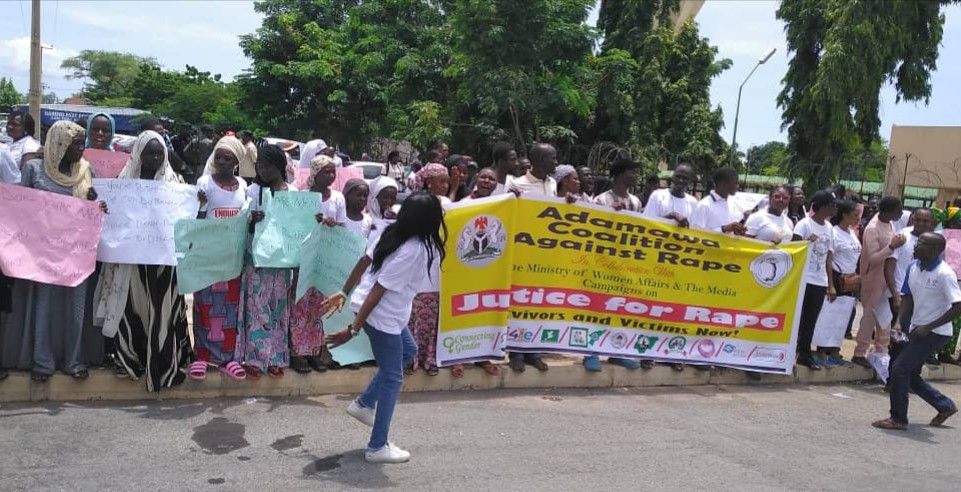 The Jimeta police division, situated few kilometres from the scene of the crime, having been alerted, promptly acted on the information. The policemen deployed, locating the survivor’s mother, went straight with the survivor to the Adamawa Hope Centre.

It was however, a public holiday, there was no staff with the capacity to manage the case at the Hope Centre. The survivor was then referred to FMC Yola by Dr. Sexana the manager of the Centre.

The survivor was taken to the health facility unconscious. She was also bleeding resulting from the rape. Was she drugged?

She was said to have been brought out of a runaway vehicle and abandoned by the roadside, by the alleged rapists. Could she be a victim of rape for rituals?

The Periscope investigation can reveal that the 15-year old survivor is related – in cousin terms – to the 5-year old girl the beastly Abbati raped and is still receiving treatment in FMC Yola. In fact she could not control her tears when the news reached her that her cousin was raped. Little she did know that she was also to be raped some months later. Could it be rape for vengeance organised by the whatever group membership that the beastly Abbati is affiliated to?

The 5-year old Abbati’s victim on admission in FMC Yola and her mother are facing difficulty of feeding, having exhausted what was generously donated by philanthropic organisations and individuals. While the rapist, shielding under a “minor clause,” even when he patronised commercial sex workers, is being fed fat by the government, building muscles as though a weightlifter in remand home, seemingly a as punishment to his crime.

It is said that justice delayed is justice denied. The Abbati-a-za-ted minor ought to have been taken care of by the same government that feeds her rapist at remand home since the philanthropic organisations and individuals are no longer visiting.

Adamawa state government through the relevant ministry must come in, to take the full feeding responsibilities among other social welfare.

Speaking to the Periscope, the 15-year old survivor, having regained consciousness and was stabilised fit to speak, disclosed that while she was going back home, following through the shortcut road she was used to, between Central Primary School and the former Nitel, three thugs in a vehicle suddenly stopped close to her, asking her to join them, insisting that they would take her home.

“I declined their offer. I told them that I would not join company, to be helped by strange people. They told me that they knew my uncle as well as our home and that I should not be afraid. When I refused. They forced me into their vehicle and covered my nose and mouth with a handkerchief they applied something. The next is to see myself on this hospital bed with pains below my abdomen and nausea,” the survivor said weeping.

The survivor’s mother added that her daughter was seen brought out of the vehicle by unidentified youth, as though lifeless and abandoned by the roadside leading to the Jimeta Eid Mosque by NTA Yola. The vehicle zoomed off after having her daughter brought out.

“We’re referred to FMC Yola from the Hope Centre. Here it is established that my daughter is actually raped and she’s been receiving proper care.

“We’re grateful to the gynae patients who forget their pains to support us financially. Hope Centre has provided some of the drugs required and the security officials; the police are on the matter, to identify the rapists either, for vengeance or for rituals or whatever,” the survivor’s mother said.

The Periscope reporter called to have the police side of the story. However, the Police Public Relations Officer DSP Suleiman Yahya Nguroge said he was yet to have information about the incident.

The survivor said she could identify the principal culprit.

Rape is second to kidnapping for ransom in Adamawa state, it is said. Only yesterday Dr. Sexana the chairman, Yola Sexual Assault Referral Centre (SARC) popularly known as Hope Centre, revealed to newsmen that the Centre has attended to 224 raped survivors since its establishment in March 2018 to date. It has added another survivor making 225