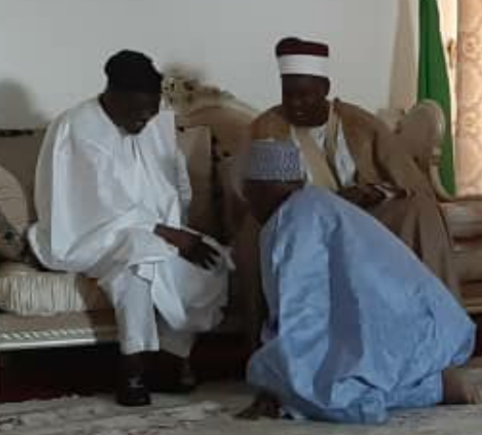 Idi could be in Jalingo-Maiha Monday, if he could beat the sensibility of the security officials that forbade him from not only parading himself as district head but also from going to the district. He could assign his ally to the fraud.

Idi was said have asked his gullible followers who considered him as demigod, to raise the sum of one million, five hundred thousand naira for him to clear the final paper that would confirm him as district head of Jalingo-Maiha; whether or not legitimate, currently on the table of governor Ahmadu Umaru Fintiri of Adamawa state.

One of the followers accosted with the donation request, seemed to be recovering from the bludgeoning influence of the Idinated seduced hypnotism, was reported to have responded; seeking to know whether or not governor Fintiri was that cheap.

“Do you mean one billion five hundred million naira..” he would ask.

“Why? One million, five hundred thousand naira only. Just give what you can but be generous,” Idi’s agent would reply.

“Not even one hundred and fifty million naira? Then Adamawa state governor must be so cheap to be bribed for a signature that can rewrite a history of new Jalingo-Maiha beyond the Ubandoma family, since Bin Fodio.

“Anyway, I promise to surrender a large part of my wealth the moment Governor Fintiri approved the appointment of Idi as district head.

“I’m now exhausted. Tired of contributing money without seeing my wealth worthy result,” one of the villagers said.

While the majority of Idi’s sympathisers were said to be developing cold feather, having suspected fraud associated with the N1.5m state chief executive signatory the financially handicap hypnotised group was said to have raised the sum of ten thousand naira. Could N1.5m get to be realised for a Monday collection?

About three days ago, there was rumour making the round in Jalingo-Maiha District, with the insignificant number of Idi’s supporters celebrating the fake news, feasting the holidays in respect of the Christmas that the impostor has finally eventually gained governor Fintiri’s executive favour approving him as district head.

A version of the story resulting from the rumour has it that the Adamawa state government shared N200,000 each to the district heads for a Christmas celebration. The Permanent Secretary with the chieftaincy affairs Mary the insubordination Kadzai nocturnally smuggled Idi the impostor’s name into the District heads lists so that they could share N100,000 each.

Mary the insubordination-in-chief Kadzai would retire in January. She was said to be milking fat on Idi, whose fortune tellers did not reveal to him how humiliatingly unfortunate and how financially wasteful associating with Kadzai.

Added to the N200,000, Idi was also given some forms to share to Farmers in Jalingo-Maiha Districts

“The forms were sent to just Idi’s supporters claiming that Idi the imposter was given the forms by governor Fintiri who now recognised him as district head in strict violation of court order,” an anonymous source revealed

Idi’s supporters waited in vain for the arrival of their district head. They were even said to be rehearsing the dance steps they would adopt as they bulldoze to desecrate the Jumua’t Central Mosque endorsing a new fetish era of anarchy in Jalingo-Maiha.

Idi the impostor currently on bail, having taking cognisance of the legal and security implications of going to Maiha, added to the financial constraints, decided to exploit his gullible supporters, requested for N1.5m from them to use as bribe to enable Fintiri to finally finish the case by endorsing him as district head.

However, Governor Fintiri was said to have told Barr Mahmud Abubakar Suleiman the Mubi Emirate Council selected, the Bindow denied and the court order endorsed District Head of Jalingo-Maiha that he should exercise patience. He would soon be granted the approval to take over as a legitimate heir, what belonged to their family.

The incident occurred some months previously at Uba Emirate Council, Askira local government area of Borno state, in the presence of HRH the Emir of Uba.