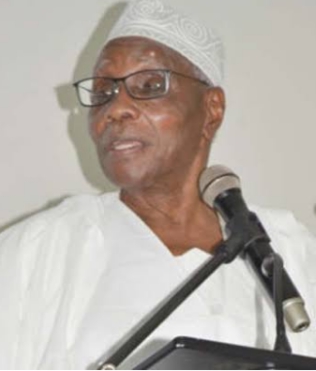 Prof Ango Abdullahi, chairman of the Northern Elders’ Forum (NEF), who is leading a reconciliation committee to resolve the ongoing political dispute between Governor Abdullahi Ganduje and Emir of Kano Muhammad Sanusi II, has lamented how his team was prevented from personally meeting with Mr Ganduje.

Professor Ango, who spoke in a telephone interview with Vision FM Kano, said some people behind the scene have instructed Mr Ganduje to reject their (northern elders) request of meeting him in person to hear his own part of the issue, but they were able to meet the emir.

He also revealed that the “desperate elements”, also rushed to announce the name of Abdussalam Abubakar, a former head of state as the chairman of another committee to work on the same mission, just to discredit the efforts of the NEF.

He explained that Abdussalam was not consulted before he heard his name over the radio as chairman of the committee, which was said to have the support of the federal government.

He said the formation of the Abdussalam-led committee was an overnight decision by those who are desperate to show their influence after noticing that the Northern Elders Forum have gone far in trying to resolve the crisis in Kano.

“The Kano crisis is baseless, it is just some political manipulation by some people who think they are the leaders, who just emerged overnight, they are not bothered with people sufferings, and they wanted to destroy institutions of over 500 to 1,000 years,” Professor Abdullahi said.

“I personally contacted General Abdussalami Abubakar and he confirmed to me that he just heard his name on the Radio,” he added.

Professor Abdullahi also said they were in Kano to get first hand information on the issue, and they have “achieved something”.

He also accused some journalists of trying to defend the governor’s refusal to meet them (northern elders) in person when the committee planned to see him, noting that only dedicated leaders can change things in Nigeria.

The former ABU Zaria vice chancellor also cautioned leaders on the importance of Kano to the northern region, saying it is the only strong state that has the respect of the entire northern region