Adherents of the branch of the Tariqa Tijjaniya founded by Shaikh Ahmadou Mbamba are called the Murides.

There are a lot of followers of Shaikh Ibrahim Nyas in Nigeria and indeed all over the world, but I don’t know of presence of the Muridees in Nigeria.

It may surprise you to know that in Senegal and The Gambia, the Mureedi order is more prominent and has more followers than the Shaikh Ibrahim Nyas order. The headquarters of the Murids is in the city of Touba, Senegal, which is a holy city for the order.

The founder of the Muridiya, Amadou Bamba (1850–1927) nickname “Khadīmu r-Rasūl” (“Servant of the Prophet”) was born in the village of Mbacké in Baol, the son of a Marabout from the Qadiriyya, the oldest of the Muslim brotherhoods in Senegal.

Adherents of Shaikh Mbamba are called Murides, literally “one who desires”. The Murids make up around 40 percent of the total population in Senegal. Their influence over everyday life can be seen throughout Senegal. Any politician who ignores them does so at his peril. I understand that they made president Abdullahi Wade and brought him down when he fell out with them. 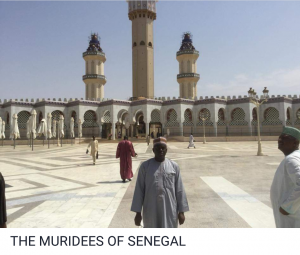 Today the Murids are led by Sheikh Sidy Moctar who succeeded his father, Serigne Mouhamadou Lamine Barra, the son of the founder of the Order, Sheikh Ahmadou Bamba Mbacke.

I was told that recently the present Murid leader had asked adherents of the order to contribute two billion CFA to renovate the mosque at Touba within a period 2 years. But within 6 months, the money was realised through donations from Murids in Senegal and from the Murids in diaspora.

Once the money was realised, the Shaikh asked the donations to stop. The result of the fund raising is this mosque you see here. Commitment to the cause of Allah through the teachings of Shaikh Ahmad Bamba, you would say.

When I arrived the city of Touba at 12. 23 pm I went straight to the mosque of Shaikh Ahmadu Bamba where his tomb is located. Apart from King Hassan mosque in Rabat, of Morocco, I have never seen a mosque like it in Africa. The mosque is certainly the best. Most importantly, the mosque was built by the community themselves with no government assistance. 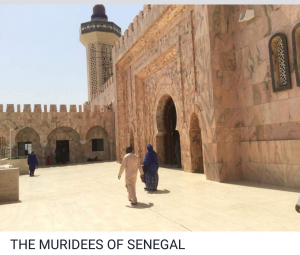 I was made to understand that the Touba people are shrewd business people equivalent to what we have in the Igbo of Nigeria.

I understand also that wherever a Murid is in this world, he brings his Zakat home. And every year, every Touba person, man or woman, must come home to Touba to commemorate the life, the suffering of Shaikh Ahmadu Bamba in the hands of the French and his eventual death as in between 1895 and 1912, Shaikh Bamba was exiled by the French colonialists to Equatorial Guinea and Mauritania and subjected to house arrest in Senegal.

The Murids commemorate this for which they come home annually in cars, horses, donkeys and on foot on a day called the ‘Touba Magal’. On this day, they bring a lot of money home. Billions are realised on what they called ‘Magal Day’ which holds every year. 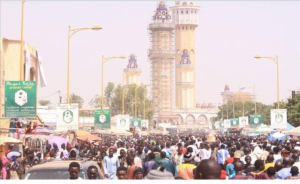 All Murids engage in one business or the other. They don’t stay long time in mosques in Zikhr. In addition, they have a culture of financially helping each to set up businesses. They also have a culture of helping the poor and the needy who are not allowed to beg. I understand they pay school fees for indigent members of the community, etc.

On the Magal day, I was told, no cheques, credit cards or pledges are allowed. Every body brings cash in bags in the full glare of the public. Every one of them is a Murid, meaning “follower”. They obey the leader without question. By the next year, recipients of the Zakat in the previous year will be among those that would give out the zakat in the following year. That’s the true purpose of Zakat in Islam. I was told that it is compulsory for every Touba man and woman to build a house in Touba city. They are a proud people who build mansions at home, close them and sleep inside once in a year and repaint the mansion just for the Touba Day – the Magal.