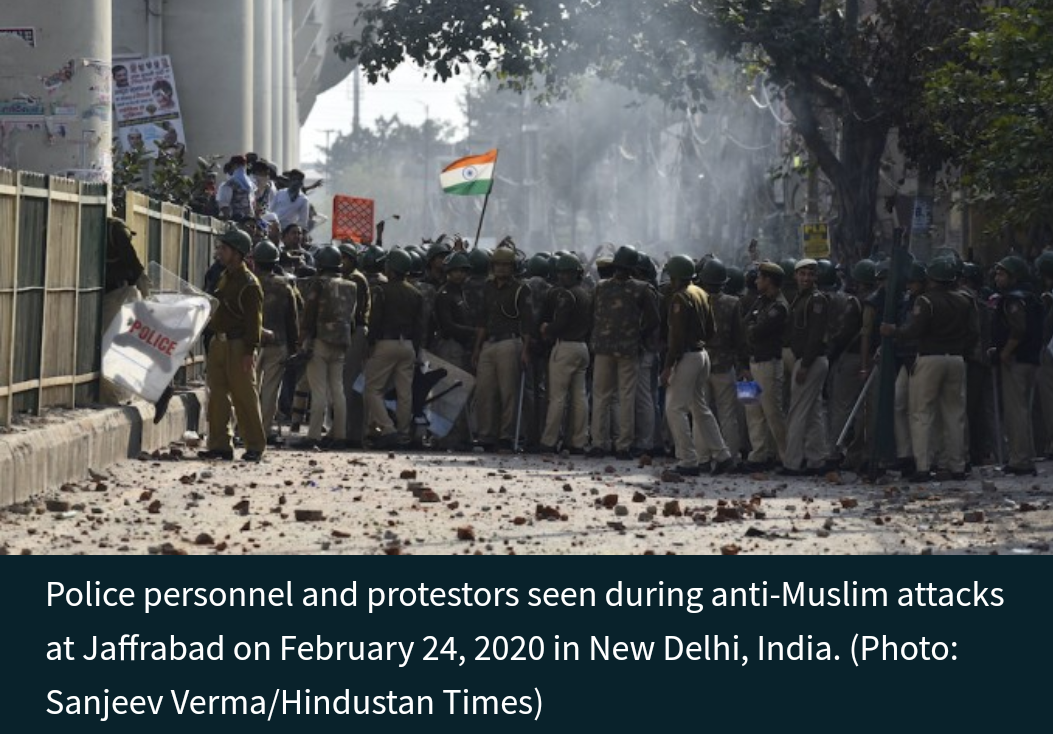 Muslims in Delhi have held Friday prayers under the watch of riot police after a week in which 42 people were killed and hundreds injured during the city’s worst sectarian violence in decades.

Scores of mosques in the north-east of the Indian capital held their first sermons since mobs armed with swords, guns and acid razed parts of the district on Monday.

Paramilitary police patrolled the streets, still littered with broken shards of glass, stones and other debris.

“If they burn our mosques, we will rebuild them again and pray,” said Mohammad Sulaiman, who was among about 180 men who prayed on the rooftop of a mosque that was set on fire in the unrest. “It’s our religious right and nobody can stop us from practicing our religion.”

Five days after the riots started, hospitals were still trying to identify the dead as the toll continued to rise. Residents of the areas affected by the riots are still looking for missing relatives.

Tensions between Hindu hardliners and Muslims protesting against the Hindu-first policies of Narendra Modi’s government had been building for months when the violence exploded on Sunday night, on the eve of Donald Trump’s first state visit to India.

Police said they had detained more than 600 people over the unrest and were keeping a heavy presence in north-east Delhi.

Dozens of volunteers stood outside the main mosque in the neighbourhood of Mustafabad, where some of the week’s worst violence took place, urging devotees to disperse immediately after prayers.

“These are testing times. We have to be patient,” said the presiding imam after calling on his congregation to stay calm.

Many in the neighbourhood were frightened after police barred Muslim worshippers from what was left of one of several mosques set ablaze by Hindu rioters on Monday.

Nearby, a group of residents in the Hindu-dominated Shiv Vihar area blocked the lane leading to one of the local mosques with the burnt-out frames of motorcycles, which they said were set alight by Muslims.

“No one will be allowed to enter until the rioters are caught,” they shouted at a crowd of Muslims seeking entry.

“We don’t want violence,” said Saleem Mirza, as police told the Muslims to disperse to avoid any fresh trouble. “We want to live in peace, work for our children and live a normal life. We prayed for peace for everyone today.”

India’s new citizenship law has triggered months of demonstrations between anti-government demonstrators and police. At least 30 people died in protest violence last year, mainly in the northern state of Uttar Pradesh.
Many of the country’s 200 million-strong Muslim minority fear the law – and a mooted citizens’ register – will leave them stateless.

Modi has sought to allay the fears but in recent weeks politicians from the prime minister’s rightwing party have called the demonstrators “anti-nationals” and “traitors”.