He has been tireless hence restless, trying to get rid of criminality in Ganye local government area of Adamawa Southern Senatorial District, northeast Nigeria; armed banditry, kidnappings for ransom and even petty theft among others.

Armed with the philosophy that security is everybody’s business, he sees the need to engage the entire members of the community to a relationship with the security officers as a pact, bearing in mind that criminals are not anywhere, other than known within the community.

It is a police community relations that is not to end in extortion, exploitation, oppression and bamboozle. It is that which will have DSP Mohammed Yahya Nuhu tirelessly restless trying to get rid of insecurity in the community as a DPO.

Nuhu has been able to put the Ganye Police Division to a habitable taste and the consciousness of his subordinates to tidiness with a view to restoring community confidence in the police as a security.

Nuhu is more of a fieldworker Police Officer, who leads any security raid, or repel any criminality against the community, than a mere “sit-down and command authority DPO”.

Nuhu is said to be tough on Kidnappers and armed robbers, among other criminals.

DSP Mohammed Yahya Nuhu, the DPO, hails from Fufore Local Government, Adamawa Central Senatorial District. Though not an indigene, the Ganye Chiefdom has found it worthy to honour the action and integrity personified police officer, as she has honoured her Professors of meritorious standing, some weeks previously.

The setting is at Gangwari Ganye’s palace. The purpose of the gathering is a reception in honor of the DPO of Ganye, DSP Mohammed Yahya Nuhu for his tireless efforts in crime fighting. The organiser is the Ganye chiefdom represented by the Ganye Youth Forum.

Surprised and humbled Nuhu, is short of words. He does not know that the community has taken to police his activities as he police the deviants in and around the headquarters of the chiefdom.

You could hear his conspiratorial monologue, seated silently, following the event the revolves around him. 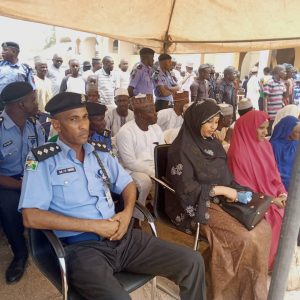 “This is a Herculean task; a challenge to intensify efforts, a scale that I mustn’t fail short,” he could in imagination constructively whisper for those with an ear to the ground to hear.

Nuhu’s response is simple and straightforward; he would not succeed without the community as a backup; the local government authority, the Ganye traditional council, the hunters and the vigilante groups, the Ganye youth groups, his subordinates, the commissioner of Police Adamawa state command and members of his family. To these groups, Nuhu says he remains grateful but most of all, he acknowledges that glory praises and gratitude joined together, goes to his maker; Allah SWT.

He thanks the organisers of the event for the exhibition of the testimony of his selfless service.

Gangwari Ganye, His Highness Alh Umaru Adamu Sanda, among the dignitaries that grace the occasion, is ably represented by the Galadima Ganye.

Family and friends of DPO Nuhu from Fufore, led by his brother Alh Bamanga yahya.