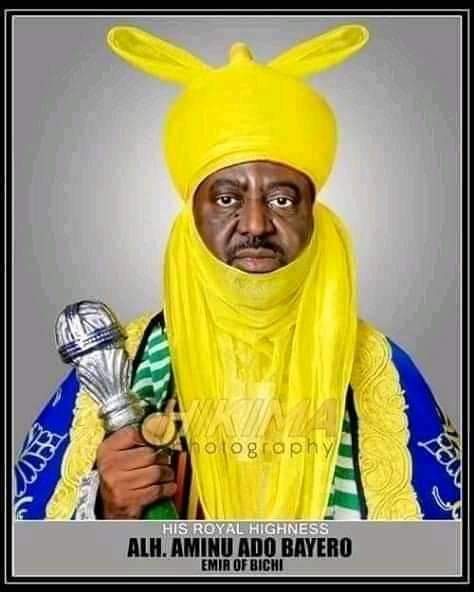 * Kano People In A Pact With Peace; No revolt, No Protest, Kano Youth Have Shown Maturity

Aminu, the son of the 13th Emir of Kano the late the Ado Bayero, now the 15th Emir of Kano, was previously appointed by Ganduje as the Emir of Bichi after having shredded the Kano Emirate.

In a press release signed by the Chief Press Secretary to the Governor of Kano State Abba Anwar, the appointment of Bayero came after the dethronement of Muhammadu Sanusi II.

Thepress release revealed that the appointment “was officially announced in the presence of the Kano Emirate kingmakers and other stakeholders at the Government House in Kano.

The removal of Sanusi II did not come to many as a surprise. The people of good conscience in Kano have been expecting it since, because the Kano governor would not be comfortable with the intellectual, internationally connected figure, who would not keep silent when his subjects would need have state’s attention, not to be shortchanged.

Guided by the last Friday’s sermons that projected the worst governor Ganduje could do to the monarchy in Kano on Monday, the youth were cautioned to keep calm and allow God to take charge of the situation, the Periscope investigation can reveal.

The Kano state lawmakers have refused to join in complicity to the executive conspiracy against the monarchy in Kano. The PDP lawmakers have technically, rather radically frustrated the sitting that would facilitate the removal of His Highness Sanusi II.

One of the lawmakers has revealed to the Periscope reporter in Kano that Ganduje would not have a soft landing for his remaining three years.

“Trust my judgment, we’ll have him impeached. We have from today, started filing Ganduje’s impeachable offences,” the lawmaker said.

His Highness Sanusi II left millions of men and women weeping and the children were reported to have been heard saying “whoever is/are behind the removal of their humbled and amiable, confident and contented, worthy, compassionate, efficient and effective Emir, who remains to us a shield, shall surely regret it in no distant future”.

Some youth group revealed that the Kano government expected revolt from the youth. “It’s a conspiracy for anarchy against our highly respected monarchy, aimed at having have to waste the able and resourceful youth. However, God Almighty is in control. No single life is wasted because we failed to physically come out to revolt. we resort to spiritual revolution, seeking for divine intervention.”

After 5 years, 6 months and 26 days of ascending the throne of his fathers, the 14th Emir of Kano, Malam Muhammadu Sanusi II was dethroned by Kano State government led by Governor Abdullahi Ganduje over what was described as disrespect to the office of the governor and other government agencies.

The Secretary to the State Government, Alhaji Usman Alhaji, who said the removal was with immediate effect, noted that the emir’s action violated the part 3 section A-E of Kano state law, hence the removal.

The 13th Emir of Kano, Alhaji Ado Abdullahi Bayero joined his ancestors on Friday, June 6, 2014 after a brief illness.

Two days after the demise of his uncle, Muhammadu Sanusi II ascended the throne after the then governor of Kano State, Dr Rabi’u Musa Kwankwaso approved his appointment.

Sanusi was nominated alongside the eldest son of the late monarch, Alhaji Sanusi Ado Bayero and the Wamban Kano, Alhaji Abbas Sanusi.

Prior to his ascension, Sanusi was an economist and banker. He served as the Governor of the Central Bank of Nigeria from 2009 to 2014, when he was suspended by then President Goodluck Jonathan after alleging that $20bn was missing from the government account.

His grandfather Muhammadu Sanusi I reigned from 1953 to 1963, when he was also deposed by the then Premier Ahmadu Bello.

His father, Aminu Sanusi never ascended the throne but he died as Ciroma of Kano. .

Sanusi was appointed Dan Majen Kano by the late Emir Ado Bayero in 2012.

The former CBN governor emerged the 14th Emir of Kano following the installation of a Fulani Dynasty by the Othman Dan Fodio Jihad.

Sanusi II is now succeeded by his brother-in-law Aminu Ado Bayero as the 15th Emir of Kano.