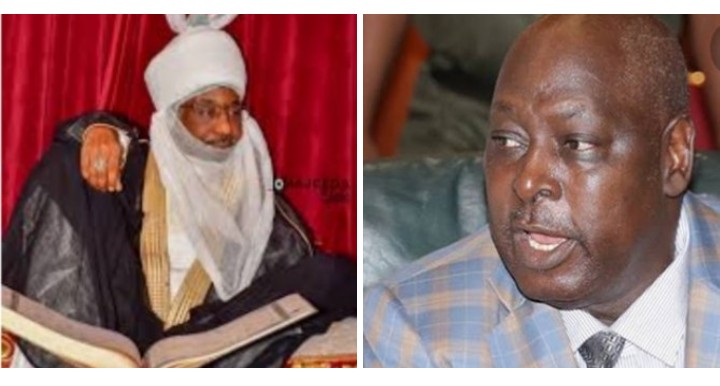 The immediate past Secretary to the Government of the Federation (SGF), Babachir David Lawal has in a show of solidarity Thursday, told the deposed emir of Kano, Muhammadu Sanusi II that he would rise again like a Phoenix, noting that he has survived similar devilish and audacious machinations by his traducers.

Lawal, has assured Sanusi that he has no reason to be angry because God would provide him with the stamina to smoothly swim against the tide.

“Find consolation in God in this time of trials and read Psalms 37 to strengthen you faith in the Almighty that things will be better after the storm,” Babachir said

Babachir told Sanusi that his commitment to serve the downtrodden in the north, has made him a subject of devilish machinations, a Satanic conspiracy, opened hatred and wickedness of the jealous. However, the consolation was the sympathy, empathy, care and concern for the exploited and oppressed downtrodden. Their prayers and Goodwill, would facilitate in the deposed Emir rising over and above his traducers.
Addressing the embattled Emir of Kano, Babachir said, “Good morning your Royal Highness. Please, note that wherever and however you may be now, God is with you, good Nigerians are with you and we the lovers of the North stand with you.

“Given the way God does His things, this is only the beginning of good things and His showers of blessings upon you.

“We, lovers of Nigeria particularly the Northern Nigerian ones, have listened to you and are in total agreement with what you say and the way you say it and we shall yet celebrate with you.

“I have gone through this type of experience and I have come out the better and stronger for it. You are a hero of all the poor, the uneducated and the oppressed Northerners in particular and indeed Nigerians.

“But you are also hated by the corrupt rich, the educated illiterates, the tribalists, some hard-line feudalists and religious bigots and they are more powerful, more united and can muster more resourses than us.

“But God is God. No man is God. Man can only be a tin god for a brief period, wither like the flower, and thereafter be accountable for all his actions on the day of judgement before our Lord Jesus Christ.

“Your Highness, I recommend Psalm 37 to you., borrow a Bible and read it, that is if you do not already have one.”

Making reference to the situation of some Nigerian leaders he admonished the monarch saying, “God is God. No man is God.

“I urge you to reflect on the experiences of two of the country’s past leaders, General Olusegun Obasanjo who was thrown into prison but ended being a two-term President, sitting on the seat once forcefully occupied by his persecutors.

“And General Mohammadu Buhari who was overthrown and banished to a town where he spent more than a year under house arrest; nevertheless, he now sits on the seat once occupied by his persecutors as a second term President.