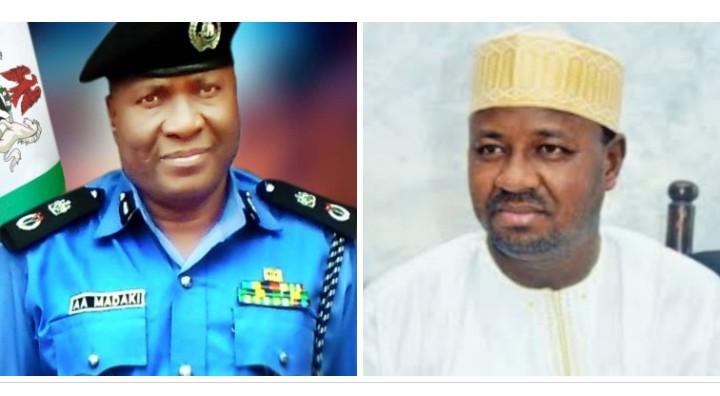 Dr Umar Ardo, considered as a controversial politician, said to be the leader of People’s Democratic Party splinter group, (r-PDP) in Adamawa State, has in an open letter, petitioned the Inspector General of Police over the alleged partisanship of Adamawa State Commissioner of Police, Audu A Madaki for what he considered as compromising his official duty by taking side with the leadership of the main party, led by Barr. AT Shehu and the Adamawa State government

Ardo has accused the Commissioner of Police of ignoring their complaint for refusing to act on the lead that would to the arrest of the alleged sponsored political thugs who disrupted their meeting, destroyed his house as the venue, broke some vehicles and injured unarmed members.

Ardo has accused the Commissioner of Police of harassing, intimidating and arresting members of his faction contrary to constitutional provisions and the spirit of neutrality, which the police ought to project.

“Wading into our party conflict, the CP started acting more as a politician than a police officer.

“A good policeman is supposed to be honest, thorough, firm but fair to all parties in the discharge of his duties. But not Mr. Madak.

“When we failed to agree on our differences and we wanted to inaugurate our own factional leadership at the Lelewal Hotel in Yola on 20th February, 2020, the police command went out of its way to seal the venue that we duly paid for to hold a legitimate political ceremony.

“Not taking into account that the Nigerian constitution section 69(1)(g) among other sections has given recognition to the right to faction in political parties, in addition to a litany of Supreme Court judgements on this matter, the police acted in this intimidating manner, claiming that our faction was not registered by INEC.

”As if all the havoc he caused us was not enough, yesterday the police commissioner dispatched a team of mobile police that went to my hometown, Kojoli, and closed the factional office, removed the hoisted flags, arrested the factional chairman, Mr. Phillip Buji, and brought and locked him up in Yola. When today we sent a lawyer, Barr. (Cpt.) Husseini Guyuk, to bail Mr. Buji, the lawyer was himself promptly detained.

“My PA, Abdulsalam Adamu, who took food to them is as well detained by the police. What is their offense, the police claims that a petition was written against us (which we are not served) by the government factional chairman, one AT Shehu, accusing us of creating a faction,” he added.

Reacting, the party members loyal to the leadership of AT Shehu denied that there was any recognised faction in PDP and that the crisis Dr. Ardo would want people believe brewing in PDP was a mere scam.

“PDP is PDP; any suffix or prefix is illegitimate and stand intolerable even at the national headquarters,” one of the pro AT Shehu told the Periscope reporter.

“You know that Dr. Umar Ardo isn’t a serious politician. He couldn’t go for a worthy critic either. He’s simply a political merchant who uses gullible and ignorant members to raise dust he wants only money to cushion the effect and there after dumps his uncritical, gullible followers.

“Who’s talking about politics in the face of COVID-19 global pandemic, when everyone is expected, even while staying at home, to maintain social distancing, other than a desperate, overambitious politician like Ardo?

“Ardo’s activities, are to say the least, in total violation of the resolution by means of intervention of the National Working Committee of the PDP.

“The NWC chaired by Prince Uche Secondus has asked the so-called, rather caricatured r-PDP to stop their anti party activities that are capable of causing dissension among party members but Ardo with his men would not honour the leadership order; yet they expect security agencies to let them disrupt the peaceful coexistence in the name of party protest,” Suleiman Shehu, a bonafide PDP member said.

Dr. Ardo noted that the party at the national level has actually constituted a conflict resolution committee under the chairmanship of the Deputy National Chairman North, Senator Nazif Sulaiman to address the conflict in the party but could not kick start the process because of the lockdown order imposed by President Muhammadu Buhari to contain the COVID-19 pandemic.

”In truth the NWC of the PDP chaired by Prince Uche Secondus wrote and directed that we halt our then ongoing membership registration, (which we complied).

“It then constituted a Conflict Resolution Committee under the chairmanship of the DNC (North), Sen. Nazif Suleiman, to look into the PDP issues in the state and come up with recommendations, (which assignment was halted by the current Pandemic Luckdown).

”Everything is been on halt, then the Police moved in with these arrests. What did we do?

“If CP Madaki wants to support the government faction of the PDP in Adamawa state, let him remove the police uniform he is wearing and come to the field. He’ll be most welcomed,” Ardo said

Reacting to the allegation, the Police Public Relations Officer, DSP Suleiman Yahya Nguroje, told the Periscope reporter that the Police Command was yet to receive a copy of the petition letter said to be circulating via social media.

Nguroje said he suspected it was a mere academic exercise if Dr. Ardo actually endorsed the allegation that seemed to be to him, informal.

“All that I can say for now, is that the command is yet to receive and if authentic, is waiting to receive the letter before making any comment if necessary,” Nguroje said.