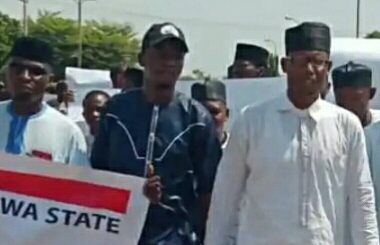 Another reaction to the defection reception at the Adamawa state government house considered as deception showcasing what was described as desperadoes in action out of misfit or mischief and/or both is dished out today.

Recall that some weeks previously, Sen Abdulaziz Nyako defined the story, which presented “mass defection of ADC members defecting to PDP as a mere political hyperbolic defection aimed at deception out of desperation, where he advised that the PDP and the governor should rather concentrate on concretizing good governance as it would be too early for politicking when the world was battling with covid-19 pandemic and the state was yet to break the ring of poverty, communal clashes and kidnappings among other kinds of insecurity.

The leadership of a political pressure group noted for championing the political cause of pioneer chairman of EFCC, Malam Nuhu Ribadu, referred to as Black Cap, has described as pure propaganda born by either political misfit or mischief and/or unfortunate both; that the Black Cap as a structure, has abandoned the anti corruption tsar lend Their support to the PDP and Governor Ahmadu Umaru Fintiri, whom they trusted has restored public confidence in governance.

In a statement Monday, in Yola, Mustapha Atiku Ribadu, the leader of the Black Cap said, it was an obnoxious fallacy cooked in the pot designed by desperadoes.

Ribadu said the entire structure of the group was intact and working assiduously on its mission.

“During the meeting, all our supporters maintained an unflinching loyalty to President Buhari’s administration and to our great party, APC.”

“Membership of our movement has been growing from strength to strength while our structures across the 21 local governments of the state are intact.”

Ribadu said those received by Governor Fintiri at the Government House in the name of Ribadu political structure were “two of our former members who left us long before the 2019 election, in company of mercenaries they procured”.

He said the arrowhead persons were never part of the key leadership of the group.

Ribadu recalled that the same persons organised similar seeming caricature and declared decamping to the camp of then Governor Jibrilla Bindow in December 2018.

Ribadu said the group was considering reporting them to the relevant authorities for impersonating its leadership and serial “stunts to defraud unsuspecting persons,” mainly the PDP led government in Adamawa.

He said the purported reception of the decampees by the governor was out of fear of Mallam Nuhu Ribadu as a formidable political heavyweight in the state.

Mr Ribadu called on politicians in the state “to be wary of the two individuals as they have perfected the habit of moving from one politician to another using Mallam Nuhu Ribadu’s name to be relevant”.

“We shall maintain our loyalty to APC and Muhammadu Buhari’s led government and will remain undaunted by this distraction.

“The ideals of our leader,  Malam Nuhu Ribadu is in tandem with that of president Muhammadu Buhari, which is championing the lot of the masses and ensuring a corrupt free society.

“We shall continue to work for the success of our party and that of president Muhammadu Buhari’s government, so as to consolidate the successes so far achieved.”