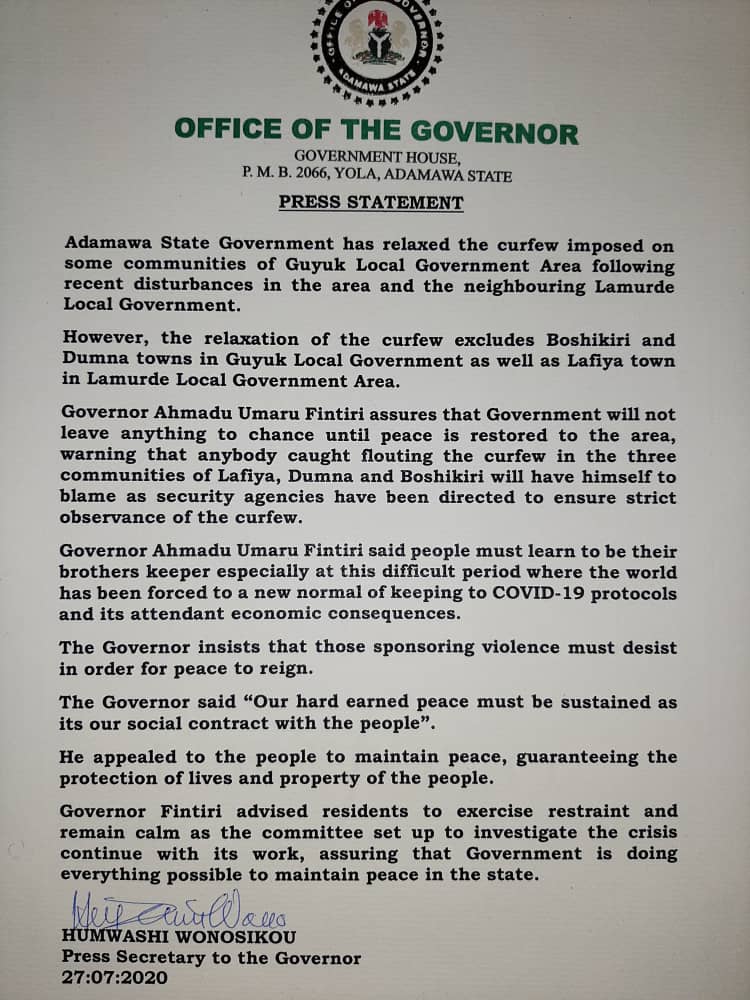 Adamawa State Government has relaxed the curfew imposed on some communities of Guyuk and Lamurde local government areas following recent disturbances in the areas.

The press release Monday, issued by the press secretary to the governor, Mr. Humwashi Wonosikou explained that the relaxation of the curfew excludes Boshikiri and Dumna towns in Guyuk and Lafiya town in Lamurde local government areas respectively.

“Governor Ahmadu Umaru Fintiri assures that Government will not leave anything to chance until peace is restored to the area, warning that anybody caught flouting the curfew in the three communities of Lafiya, Dumna and Boshikiri will have himself to blame as security agencies have been directed to ensure strict observance of the curfew.

“Governor Ahmadu Umaru Fintiri said people must learn to be their brothers keeper especially at this difficult period where the world has been forced to a new normal of keeping to COVID-19 protocols and its attendant economic consequences,” Wonosikou said.

Wonosikou said Governor Fintiri has emphasised that those sponsoring violence must desist in order for peace to reign.

“Our hard earned peace must be sustained as it’s our social contract with the people,” Fintiri said

“He appealed to the people to maintain peace, guaranteeing the protection of lives and property of the people.

“Governor Fintiri advised residents to exercise restraint and remain calm as the committee set up to investigate the crisis continue with its work, assuring that government is doing everything possible to maintain peace in the state,” Wonosikou said.