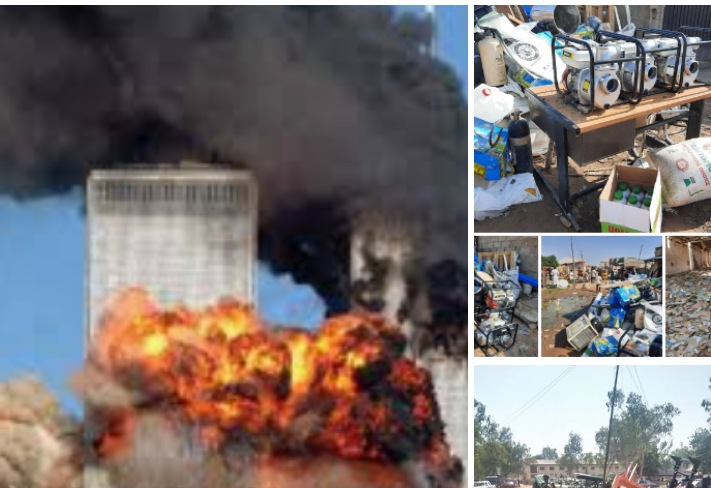 When on September 11, 2001, the twin towers referred to as the world trade centre were reduced to rubbles; many were injured, some were declared missing and lives were lost; the survivors were left counting the losses and the government counting the costs.

President Bush, in a worldwide broadcast, announced that it was a war against America by the terrorists and that people and countries should decide the side to support; “you are either with us or with the terrorists”, leaving no room for double standard in matters of choice.

Americans were not bothered that they were challenging the electioneering process that brought back the brutish Bush, alleged to be fraudulent, hence unacceptable.

They have not blamed the Bush led government for instigating the bombing with the seeming unacceptable international relations monstrous policies that glorified the predators and suppressed the prey to keep on being oppressed.

The Americans simply trusted their president, with the majority supporting that he should go after the terrorists; known and unknown; real and imagined, backed by the aggressive media propaganda costing fortune to run.

Hoodlums have attacked Yola, Adamawa state capital. They vandalised and looted both public and private properties estimated to have worth billions of Naira. The wanton destruction is considered as a state tragedy.

While the hoodlums’ activities were heading towards redefining the state, reducing it to a republic of looters, some rather unpatriotic citizens, while glorifying the looting, blamed the government for hording food commodities that were ought to be shared as palliative to the vulnerable poor across the state, even after superior explanations were advanced.

When the Adamawa State Government would have been commended for the crisis management and the effective and efficient strategy spelt out for the hitch free recovery of the looted properties, the unpatriotic citizens, some of whom were said to have formed part of the previous system the electorates resisted having the state degenerated into a republic of liars, have taken to politicising the tragedy instigating resistance to the means of recovery.

In the hoodlum-a-za-ted #EndSARS protests, Adamawa state is the worst hit in the entire northern Nigeria. Schools, training centres security offices, other offices silos, even hospitals were not spared.

In took diplomacy to keep the hoodlums away from Federal Medical Centre, FMC Yola, American University of Nigeria AUN Yola and Adamawa State University, ADSU Mubi. If they had succeeded, Modibbo Adama University of Technology MAUTECH Yola, Collage of Nursing and Midwifery Yola, Adamawa State Polytechnic SPY, Federal Polytechnic Mubi and other tertiary institutions would not have been spared.

An observer revealed to the Periscope reporter that trucks were parked, hidden from public glare. Punks were engaged for a miserable amount, to join the looting and load the trucks full to the brim with the looted grains.

The question that is remained to be asked like Michael Jackson would, “Who’s bad?”

A loan of over N9b was by the state government sourced for the 2000 housing unit projects across the state among other loans. There was also the N17b loan for the building of flyovers in the state capital.

Hospitals, schools and roads among other projects were flagged off with reasonable completion period, salaries and pensions are paid as at when due.

Public confidence in good governance was gaining gradually just before the state’s avoidable tragedy, had those who were deceived, used their conscience against defective memory, to note that public and private properties vandalised do not belong to governor Fintiri or any of the members of the cabinet. They belong to the government and the government is the people, therefore the people are the government.

The government and not the governor will therefore have to fix the properties vandalised. It is estimated to have worth billions of naira. The state is however constrained financially.

The vandalised properties were not put together by a single team of leadership in either a day, a month or a year, some have been there for decades. They need to be fixed given a no other alternative room for another loan of billions of naira for sure.