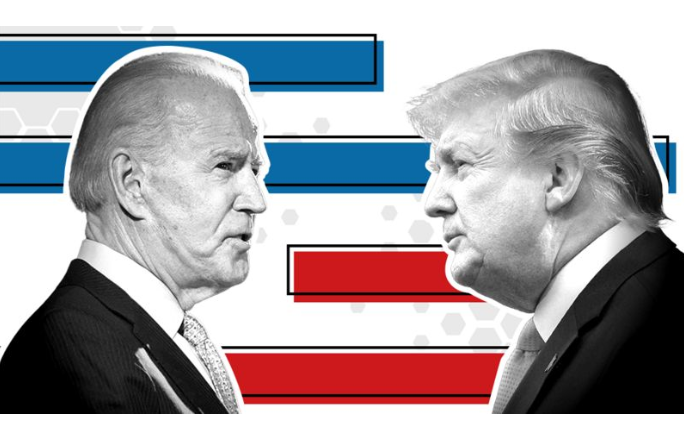 In the US election, Americans vote for candidates called ‘electors’ in their state who are supporting the candidate they want to become president – this process is called the Electoral College.

The more people to live in a state, the more electors there are for that state. So, California for example, with a population of 38.8 million, has 55 votes – while Delaware, (pop. 936,000), has just three votes.

There are currently 538 electors in total, corresponding to the 435 Representatives (congressmen and women) and 100 Senators, plus the three additional electors from the District of Columbia. The Constitution prohibits any federal official, elected or appointed, from being an elector.

The candidate with the most electors wins all the state’s electoral college votes and the first candidate to win enough states to get to 270 electoral votes is elected to that office.

What is the Electoral College?

The Electoral College chooses the president of the United States. When an American citizen casts his vote, he is not directly choosing a presidential candidate. Instead, he is choosing an official, who will represent him in the ‘college’.

The word ‘college’ translates to a large group of people (the elected officials) who have the job of choosing the president, and this role is carried out a few weeks after the results of the election day.

Why do we have an Electoral College?

The nation’s founders established the Electoral College to ensure the entire country had a more equal say in the choosing of a national president.

In a time when the states were more autonomous and the federal government didn’t have as much power as it does today, the framers wanted to offset the chance that a single populous state or region would choose a “favorite son” candidate who would almost exclusively represent the contender’s home state and at the expense of other, smaller parts of the country.

How are the Electoral College votes are distributed?

What happens if the Electoral College fails to elect a president or vice president?

Each elector is required to cast one vote for the president and another vote for vice president.

If no candidate receives a majority for president then the House of Representatives selects the president, with each state delegation (instead of each representative) having only one vote.

How many times has this happened?

On five occasions the Electoral College system has resulted in the election of a candidate who did not receive the most popular votes in the election:

How does the Electoral College work?

In almost every state, the candidate to gain the highest number of votes will win the ‘electoral’ vote for that state. This individual will then, therefore, receive this number of seats in the ‘Electoral College’. Then, the elected figures from each of the 50 states gather, and vote for the president.

The structure of the Electoral College means some states, known as the ‘Swing States’, carry more weight and overrule the popular vote. The power of these swing states was seen in the results of the 2016 election, when Hillary Clinton claimed 2.1% more of the popular vote than Trump, however, she failed to win over the swing states, and consequently lost the Electoral College vote, and with it, the election.

What happens if the Electoral College is tied?

Though the official results of the 2020 election will take days, or even weeks, to confirm by the Electoral College, figures from the election night will start to emerge once the first polls start to close around 7pm EST (12am GMT).

Among the 50 states, there are eight states, known as ‘swing states’, or battleground states, which have the ability to transform the election results.

The eight swing states are:

What makes these states so powerful?
It comes down to the ‘winner takes all’ system in all states (except Maine and Nebraska), the winning party claims all electoral votes across the entire state. Therefore, for example, if the majority of people vote for the Democrat’s in Florida, the Democrat party will take all 29 electoral votes.

In the 2020 election, Florida, Michigan, North Carolina and Wisconsin are all crucial to the overall outcome, as they were states which only marginally voted for Mr Trump in 2016, and therefore assisted him in his electoral college victory.

Currently, Mr Biden holds a narrow advantage over President Trump across five of the all-important eight swing states. These states are Wisconsin, Pennsylvania, Florida, Arizona and Michigan. The state of Michigan is fundamental to Biden’s victory, as the state has large white suburbs, union members and black voters, and so a loss in Michigan would be detrimental for Biden’s presidency chances.

At present, there is a 10-poll average which indicates that just over half of Americans intend to back Mr Biden while Mr Trump’s support falls behind by five or six points.