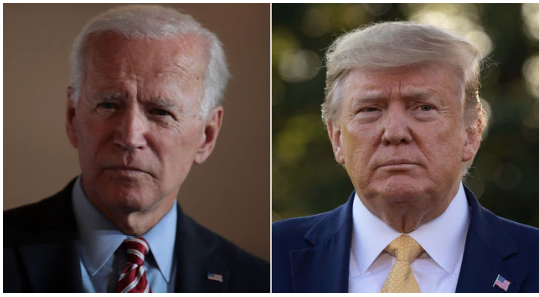 By Farooq A. Kperogi, Ph.D.

As of the time of writing this, all indications point to a decisive Electoral College win for Joe Biden and Kamala Harris. Donald Trump, who stays sleepless at nights to rage-tweet insane inanities, had in his characteristic juvenile schoolyard bullying called Joe “Biden Sleepy Joe.”

Well, Trump’s infantile nickname for Biden is ironically fitting in retrospect. After four years of a tumultuous, unconventional, incompetent, and immature presidency that kept both Trump and the world sleepless, we need a sleepy person at the helm so we can all go to sleep and not be worried that a corrupt, self-dealing, inept, perpetually enraged sociopath with access to nuclear codes is president of the world’s most powerful nation.

When my wife and I voted early on October 15, I said on social media that I did so to bring back decency to the White House and to restore the values that attracted me to America.

I’m a Nigerian by birth and an American citizen by choice. In my nearly two decades of living here, I hadn’t ceased to be amazed by the grace, magnanimity, and hospitality of most Americans; by the resilience, beauty, and ruthless efficiency of America’s institutions; and by the opportunities the country gives to immigrants. Then Donald Trump became president. And everything changed.

In the last four years, Trump’s America has reminded me of the country of my birth in many ways. Trump supervised the systematic demolition of the institutions, traditions, norms, and values that made America a transcendent shiny star in the world’s firmament and a welcoming place for everyone who shared in the country’s ideals of “Life, Liberty and the pursuit of Happiness.”

Even in defeat, Trump is continuing with his banana-republic-style destruction of America’s centuries-old traditions. He is baselessly sowing doubts in the integrity of the electoral process. He did exactly that in 2016 when he thought he’d lose.

Like a stereotypical Third World dictator, he is inflaming the passions of his supporters and rousing them to violence. He wants to burn the system down because he can’t have his way. Just like he has made a habit of mindlessly labeling any factual and accurate but unflattering news about him “fake news,” he is alleging electoral malpractice, without evidence, because he is losing.

Trump checks all the classic characteristics of the sorts of authoritarian narcissists the US State Department threatens with visa bans and that U.S.-based NGOs habitually denounce and shame. That is why every reasonable American is worried that Trump has diminished America’s global moral authority in ways no one has ever done.

For instance, when U.S. Secretary of State Mike Pompeo tweeted on November 2, “We are deeply concerned by reports of election irregularities, politically motivated arrests, and violence during Tanzania’s elections last week. We urge authorities to fully address concerns of irregularities and will review allegations of the use of force against civilians,” his message was at once hollow, hilarious, and self-indictingly satirical.

As you would expect, Pompeo was widely panned on social media for looking at the speck of sawdust in Tanzania’s eye and paying no attention to the plank in America’s own eye. Someone, for example, told Pompeo that he “misspelled America” as “Tanzania.”

That is the lowest watermark in America’s moral standing that I have ever seen. And it’s all thanks to Sleepless Donald who has ensured that America has literally become the laughingstock of the world and the butt of cruel jokes.

It isn’t surprising that in his hours of desperation, Trump looked up to Africa, which he had called a “shithole,” for forlorn hope. On Election Day, for instance, he retweeted a video of braindead and self-hating Nigerian Trumptards rallying in support of him. He said he was “honored” by it.

And after it became apparent that Trump would lose, his comically unhinged spiritual adviser by the name of Paula White went on a wild prayer rant calling for “angels from Africa” to magically give Trump electoral victory. Many people joked that the African angels were denied visas at US embassies.

But this joke has a basis in reality. In a March 7, 2020 column titled, “Nigerian Trumptards Are the World’s Most Annoying Humans,” I wrote: “For instance, ‘Nigeria had the biggest drop in visitors to the US’ in the world in 2019, according to data from National Travel & Tourism Office. This has roots in Trump’s racial animus against Nigerians (and, of course, other non-white people who come to or live in America).

“Trump was widely quoted in January 2018 to have said he didn’t want immigration into the US from ‘shithole countries’ like Nigeria and Haiti and instead wanted ‘more people coming in from places like Norway.’ In other words, he wants only white immigrants.”

I wonder why Trump was suddenly “honored” by the rally of “shithole” people who dwell in “huts” (in December 2017, he said Nigerians should be denied visitor’s visas because they would never ‘go back to their huts’ after seeing the US,” according to the Business Insider) and why his spiritual adviser wanted shitty angels from shitholes to salvage his doomed reelection bid.

Well, it’s probably because he knows there are hordes of brainless know-nothings who worship him in Nigeria. After he is finally booted out of the White House in January next year, he should get in touch with his Nigerian supporters and establish a new country. They can call it the “Talibangelical Republic of Trumpistan.”

Whatever it is, Trump will go down in history as the absolute worst president America has ever had. In America’s nearly 250-year history, only three presidents have been impeached, and Trump is one of them. The other two are Andrew Johnson and Bill Clinton.

Again, in America’s entire history, only five presidents lost the popular vote, and Donald Trump is one of them. The others are John Quincy Adams in 1824, Rutherford B. Hayes in 1876, Benjamin Harrison in 1888, and George W. Bush in 2000. But “Trump lost the popular vote by a greater margin than anyone ever elected president,” according to U.S. presidential historians.

Finally, out of America’s 45 presidents, only 12 have lost their reelection bids, and Trump seems headed for that fate. With the likely outcome of this election, I think 2020 has redeemed itself. I can forgive all the hurt it has thrown our way.

My relative-in-law by the name of Oye Owolewa is one of at least three Nigerian-Americans I’m aware of who just got elected into legislative positions in the United States.

The shadow House of Representatives member-elect from the District of Columbia is the grandson of my aunt-in-law, that is, the older sister of my wife’s father. His maternal grandmother, the late Chief Phoebe Chiadi Ajayi-Obe, about whom I wrote in a July 18, 2020 column, is Nigeria’s second female Senior Advocate of Nigeria (SAN) and Eastern Nigeria’s first female SAN. 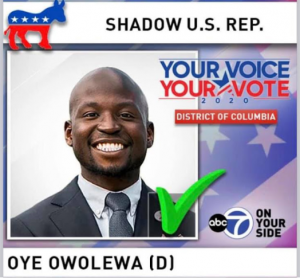 Although I have never met the younger Owolewa, his father, who is from Omu-Aran in Kwara State, attended my wedding. He came to me after the wedding ceremony and said, “Asalam alaikum, brother! I’m delighted to welcome the second Muslim into the family.”

The Owolewas are devout Muslims, and the House of Representatives-elect brought his Muslim identity to the fore during his campaigns. “As a Nigerian-American and a Muslim, I look at [Donald Trump’s] policies as a direct finger at me saying, ‘You’re not welcome here,’” he said in a campaign video. “Even though I have done my best to provide for my community…I still feel I’m not good enough for Donald Trump.”

In spite of his “outsider” identity, Owolewa won more votes than his two other competitors combined. So in spite of Trump’s racist, juvenile vileness, America is still a great, tolerant country.

Plus, I doubt that the three young recently elected Nigerian-American legislators would have had a snowball’s chance in hell of being elected if they vied for equivalent positions in Nigeria.