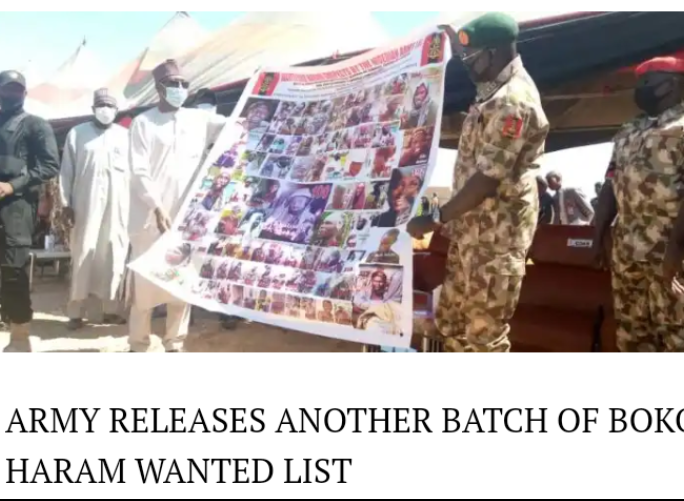 The Nigerian Military has made public another batch of 86 wanted Boko Haram terrorists to the general public in it’s efforts to finally defeat insurgency and flagged off the operationalization of the members of the Civilian Joint Task Force ( CJTF) in the Super Camp concept of the Nigerian Army.

While flagging off the operationalization of the CJTF and launching of the fourth batch of the wanted list of the Boko Haram terrorists at the Chabbal Super Camp, Maiduguri on Wednesday, the Chief of Army Staff , (COAS), Lt General Tukur Buratai said ”as we are poised to carry out our final push to flush out Boko Haram, it’s therefore my opportunity to invest the 4th list of the wanted Boko Haram list.

”We are going to make the list available to all our formations and CJTF locations, they may be at your backyard or your markets, you should fish them out, and arrest them.

“During the first, second and third wanted list we have succeeded in arresting many insurgents and made them to face the wrath of the law.

“Thethe concert of the volunteer forces started back in 18 century with the volunteers from various war front to form Delta force. The CJTF started in 2013 to 2014 here in Maiduguri, where they played a major role in chasing out Boko Haram out of Maiduguri and other towns in the state, since then they have been playing a great role in the counter insurgency war.

”The induction of the CJTF into the operation of Super camp will help in identifying, the Boko Haram and their enclaves, we have been stressing that the fight against insurgency is not left for the military alone, hence the collaboration with the government in releasing the CJTF is important in our final push”.

Bursts comnended Governor Zulum for approving the release of the CJTF, adding that with the collaboration between the military and CJTF the insurgency will soon come to an end.

Speaking, Governor Babagana Zulum of Borno state said ”this occasion of streamlining the CJTF into the operations of the Nigerian military in a collaborative efforts and the launching of 4th Batch of the wanted list of Boko Haram is very important in the fight against insurgents and the kind of collaboration we have been calling for”.

While announcing the donation of additional100 motorcycles to be injected into the concert, the governor said ”this government will continue to support the CJTF in complimenting the Nigerian military in the fight against Boko Haram.

“Peace is necessary, the nexus between peace and development cannot be over emphasis, this operation would help us in our developmental efforts.

”For those Boko Haram that are still in the bush, I am calling on you to surrender, because you are killing your sister and brothers and destroying infrastructures built with your money. You should have a rethink and give peace a chance”.

Zulum has called on the people of Borno state to support the military in discharging their duties and also played for the repose of the souls of those killed in the fight and their families the fortitude to bear the lost.

Earlier, in his welcome address, the theater commander Operation Lafiya Dole, Major General Farouk Yahaya said the super camp concept has been conceptualised in the theater but the induction of the CJTF in the super camp is major step in the fight against Boko Haram.

Yahaya commended governor Zulum for supporting the military and the state Attorney General of the state, which have being the link between the government and the military for his commitment and support to the operation.