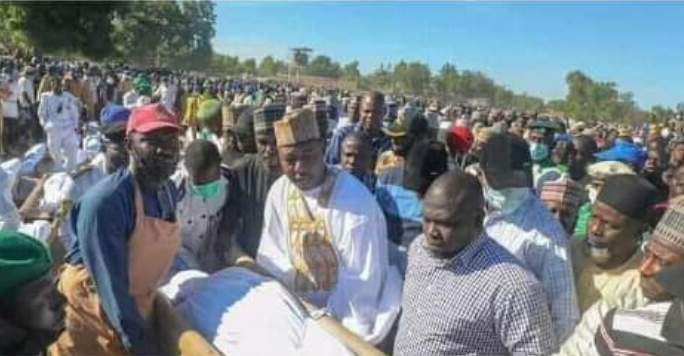 * Despite regional efforts to end Boko Haram’s campaign of violence, the group has stepped up its attacks in recent months

More than 43 people have been killed in what the Nigerian president has described as an “insane” attack in north-east Nigeria on Saturday.

The attackers tied up agricultural labourers working in rice fields and slit their throats, in Zabarmari village near Maiduguri, the capital of Borno state, northeast Nigeria, reports say.

This is one of the worst attacks in recent months in a region where the Boko Haram and the Islamic State West Africa insurgent groups are active.

No-one has yet claimed responsibility.

“I condemn the killing of our hard-working farmers by terrorists in Borno state. The entire country is hurt by these senseless killings. My thoughts are with their families in this time of grief. May their souls rest in peace,” said President Muhammadu Buhari.

Mr Buhari also described “the terrorist killings as insane”, according to his spokesman Garba Shehu.

“We have recovered 43 dead bodies, all of them slaughtered, along with six others with serious injuries,” a local militiaman who helped the survivors told the AFP news agency.

More bodies were reportedly found later – but the exact number of the victims was not immediately known.

The victims were labourers from Sokoto state in north-western Nigeria, roughly 1,000 km (600 miles) away, who had travelled to the northeast to find work, another militiaman told AFP.

The governor of Borno state, Babagana Zulum, attended the victims’ funerals on Sunday.

“It is disheartening that more than 40 citizens were slaughtered while they were working in their farmlands,” he told journalists.

“Our people are in very difficult situations, they are in two different extreme conditions: in one side, [if] they stay at home, they may be killed by hunger and starvation; on the other, they go out to their farmlands and risk getting killed by the insurgents. This is very sad.”

He called on the federal government to recruit more soldiers and members of other security forces to protect farmers in the region.

The farmers “were attacked because they had on Friday disarmed and arrested a Boko Haram gunman who had been tormenting them”, a member of the local parliament, Ahmed Satomi, told newspaper Premium Times .

Correspondents say farmers have previously been attacked by militants of the Islamist group Boko Haram, who suspect them of passing on information to the military.

On Sunday, six soldiers were reportedly killed in a jihadist ambush near the town of Baga in Borno State, says the BBC’s Chris Ewokor, in Abuja.

The soldiers were on their way to the area to boost security at a food distribution depot for people displaced by the conflict.

Despite regional efforts to end Boko Haram’s campaign of violence, the group has stepped up its attacks in recent months.

The Nigerian government has repeatedly claimed that the Islamist militant groups have been technically defeated, correspondents say.

President Buhari, who five years ago asserted that Boko Haram had been defeated, said he had given all the support needed to the armed forces to protect Nigeria’s population.

But the Nigerian military has been unable to quell the insurgency affecting the region, in which tens of thousands have been killed or abducted