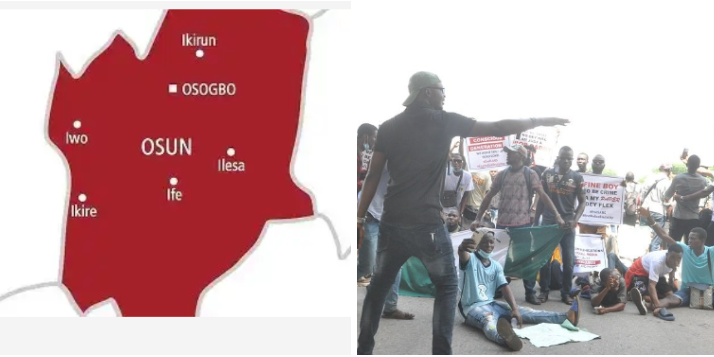 #EndSARS Protesters have hit streets in Osogbo the capital of Osun State demanding the release of all detained protesters and unfreezing of their accounts by the Central Bank of Nigeria (CBN).

The protesters, the Nation reported, have on Monday December, 7, 2020 converged at the Ogo-Oluwa area and marched to the Osun State House of Assembly along with the State Secretariat, Abere.

The placards read: “We are not fighting for any political party”, “#End Bad Judiciary in Nigeria”, ”#End fake judicial panel of Inquiry in Osun”, “Unfreeze all the frozen account”, ” We are Nigerian youths” among others.

What happened with the dialogue? Are stakeholders not been carried along? Are EndSARS protesters or hoodlums set for a second round of looting?

President Muhammadu Buhari was on November 17, quoted by the Minister of Police Affairs, Muhammad Dingyadi, as saying that he would do whatever it takes to ensure that there is no repeat of EndSARS protests in Nigeria again.

“What we are saying is that government will continue to dialogue, it will continue to listen and will continue to carry all stakeholders along in ensuring that there is no repeat of what happened that destroyed a lot of property, public and private, individuals in this country,’’ the minister quoted the president to have said.

The #EndSARS protests started in October with the demand for the disbandment of SARS, a police unit accused of extrajudicial killings and other abuses.

The protests continued even after the government announced the dissolution of the unit, with campaigners insisting the measure be implemented.

The protests snowballed into riots having taken over by the hoodlums, which culminated to wanton destructions and looting across the country.