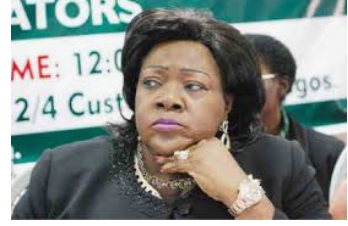 By Farooq A. Kperogi

I don’t want to be known as the guy who exposes or popularizes exposés on people’s forged qualifications. But when our reporters have shown themselves to be either unable or unwilling to bring to light cases of shockingly brazen and bizarre certificate forgeries in high places, it behooves those of us on the reportorial fringes but with knowledge of these frauds to fill the gap.

Early this month, the Nigerian diasporan online media were abuzz over the scandal of Ndi Okereke-Onyiuke’s fake doctoral degree on the basis of which she became so many things in Nigeria. The stories were accompanied by compellingly irrefutable documentary proofs of her culpability. Strangely, however, no Nigerian newspaper has touched the story with a ten-foot pole.

Essentially, it has been established that Okereke-Onyiuke’s claim to have earned a Ph.D. in business from the City University of New York (CUNY) in 1983 is fake. This shocking discovery was instigated by investigations into her other famous claim to have worked for years at the New York Stock Exchange (the world’s largest stock exchange) before returning to Nigeria in 1983. That claim has since been proven to be false as well.

In January this year, the (American) Securities and Exchange Commission sent a request to the City University of New York’s Graduate School asking to know if Okereke-Onyiuke indeed earned a Ph.D. in business from the school. The Director of Student Services and Senior Registrar of CUNY’s Graduate School, identified as Vincent J. De Luca, categorically said in a statement that she did not.

“On January 18, 2011, I caused a search to be conducted of our student records (including graduation records) at The Graduate Center, at the request of the United States Securities and Exchange Commission, to determine if Ms. Ndi Okereke–Onyiuke was ever enrolled in the Ph.D. Program in Business and if she received a Ph.D. in Business at The Graduate Center,” De Luca wrote in a sworn affidavit in New York.

Even the authenticity of her bachelor’s degree is being called to question. A search in the database of the U.S. Department of Education and the Accrediting Commission of Career Schools and Colleges by a Nigerian online citizen media site [the link is dead now] found no record for the undergraduate school she claimed to have attended.

Given that all the things around which the social and intellectual basis of her legitimacy revolve have turned out to be fake—e.g. her claim to have worked at the New York Stock Exchange, her claim to have earned a Ph.D. in business, etc—I won’t be shocked if it turns out that, like Andy Uba, she actually does not even have a legitimate high school qualification. It would really be dismally dispiriting on so many levels if this were to be the case.

I now have no doubt that Nigeria is the safe haven for, and the world’s capital of, fakery in high places. Why wouldn’t it be when we have embraced and internalized a culture of glamorizing incompetence and mediocrity? All it takes to climb to the upper reaches of the social scale in Nigeria is to have the ability or luck to know the “right” people in the “right” places— and to be able to scheme and connive and bootlick.

But, for me as an academic, the bigger scandal in all this is that the University of Nigeria Nsukka, one of our finest universities, actually awarded Okereke-Onyiuke a “professorship” in “capital market studies” in 2007 when, in fact, she has never had a full-time appointment with the university. Let’s even forget for now that her Ph.D. is fake. A professorship is not an honorary title that can be arbitrarily bestowed on people who pay for it—the way the honorary doctorate has become in Nigeria. A professorship is the highest-ranking position for a university academic, and people don’t get it unless they actually teach, research, and render services on a full-time basis in a university.

There are three main criteria to rise through the academic rank: teaching, research, and service. Since Okereke-Onyiuke has never taught at UNN and has no scholarly, peer-reviewed publications to her credit, she absolutely has no business being a professor. Awarding a professorship to her in spite of the obvious absurdity of doing so is the most scandalously grotesque profanation of that title I have ever encountered anywhere in the world.

Yes, there are several university professors in Nigeria who are not worthy of that title on the basis of their research output (which requires over 40 peer-reviewed scholarly articles in academic journals or at least two scholarly books published by reputable academic presses), but they at least actually teach—or taught—in a university and render(ed) services in various capacities in the universities as a matter of routine. After all, in the United States, there are people who become “full professors” (as Americans call professors) on the strength of their teaching alone. They are called “teaching professors” as opposed to “research professors.”

Okereke-Onyiuke’s only association with university teaching, according to her official bio, was when she taught “MBA, MBF and MSC classes” at the University of Lagos between 1995 and 1997 as a part-time lecturer. (I pity the unfortunate students who had the misfortune to be taught by her). Interestingly, it is UNN, not UNILAG where she “taught” part time for two years, that conferred a “professorship” on her.

Well, now that it has come to light that Okereke-Onyiuke’s Ph.D. is fake and that her professional profile is willfully hyperbolized (to put it nicely), does UNN owe its students, staff, and alumni an apology for shamelessly desecrating the highest possible honor in academia by awarding it to an undeserving forger?

But it’s not only Okereke-Onyiuke that UNN has awarded an unorthodox, unmerited professorship to. Dora Akunyili is another. Although she taught at the university for long, she left for public service when she was many ranks away from a professorship. Curiously, however, it was while she was officially away from teaching, research, and university service that she mysteriously skipped several ranks and became a “professor.” What’s really going on at UNN?

To be sure, it’s universal practice to appoint people with extensive industry experience (who may not even possess a Ph.D.) to professorships. In America, such people are called “professors of practice.” But in all cases, the professors of practice often resign from their jobs and become full-time employees of the university that appoints them to the position.

Given the multiple layers of dissimulation in Okereke-Onyiuke’s educational and work profiles, it’s obvious that she wasn’t worthy of being a professor of practice in any university, except we want to degenerate into teaching what she actually practiced—forgery.