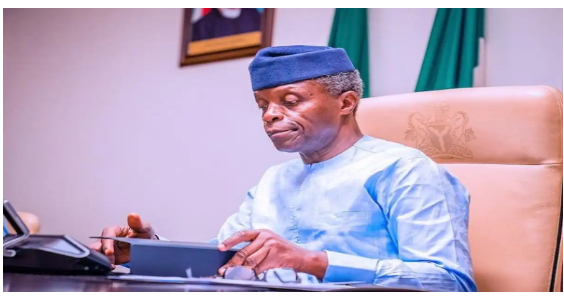 Inside sources in the All Progressives Congress (APC) have revealed to Legit.ng how Vice President Yemi Osinbajo saved the day at the National Executive Council meeting of the ruling party.

According to a chieftain of the party present at the meeting, the vice president’s counsel produced the consensus upon which the ongoing reorganisation of the party is resting.

The source who chose to be anonymous said the plan of the group of a few APC governors working through the Buni-led National Caretaker Committee of the party was to dismiss the state, zonal and local government organs and handpick their replacements.

According to the party chieftain, that was the main aim of the NEC meeting.

At the meeting, the vice president, who is a legal luminary himself cautioned that arbitrarily dissolving those party organs would be open to legal challenges which could have a good chance of succeeding and hurting the party down the line.

The source said, “Just before the proposal was tabled for final affirmation, the president yielded the floor and asked his deputy to comment, and it was then the VP, a Senior Advocate of Nigeria who said that what should be done is not just to dissolve the state and local government party organs but to make the existing executives holding the reigns of those organs the new members of the caretaker committees.”

The source said the wisdom of that proposal is that it effectively neutralises those who may have legal and legitimate grounds to challenge the dissolution since they would still be the ones effectively in charge of running the party at their different states, zonal and other levels.

He added, “Not only did the president saw the wisdom in the vice president’s suggestions, but the proposal also became the resolution of yesterday’s NEC meeting.”

Even though members of the NEC debated the whole idea of dissolution back and forth, it was agreed by all that a more careful approach as put forward by Osinbajo would save the party from potential litigations in the near future.

He further said, “This was why the VP’S suggestion was embraced and the proviso recommended by him added to the motion to dissolve the party organs.”

Meanwhile, Hilliard Eta, a former national vice-chairman, south-south of the APC, was expelled from the party at the meeting.

In a related development, the ruling party granted a waiver to some persons who recently joined its fold, making them eligible to contest elections on its platform.

Among those who will benefit from this waiver are Governor David Umahi of Ebonyi and Yakubu Dogara, a former speaker of the House of Representatives.