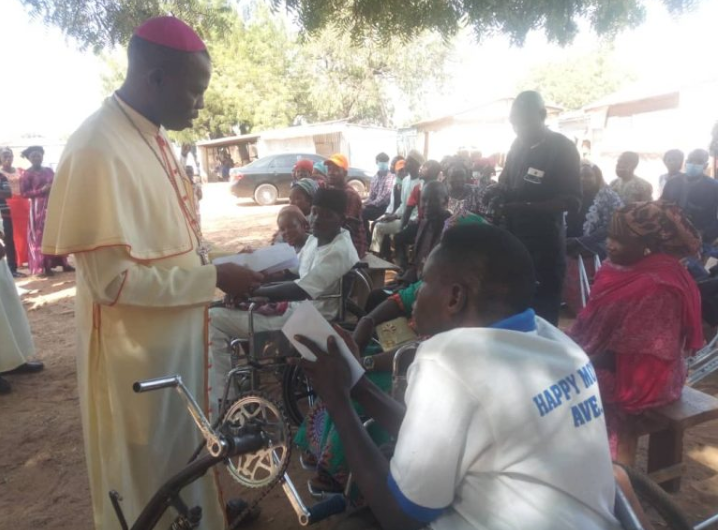 Catholic Bishop of Yola Diocese and Adamawa State chairman of the Christian Association of Nigeria (CAN), Bishop Dami Mamza has shared N10,000 each to 200 People Living With Disability PLWD.

PLWD has earlier protested against what they referred to as executive deceit, lamenting that the Adamawa state governor has sidelined after winning the election that they participated in campaigning for.

Receiving the protesters, the chief of staff to the state governor, Prof. Maxwell Gidado pleaded with them to be patient that the governor was engaged with the activities of the state but he would see them next year.

For Bishop Mamza, next year would be too far late or too far to listen to the PLWD.

Mamza said the gesture was to enable beneficiaries celebrate Christmas in a happy and convivial atmosphere.

Mamza explained that it has been his culture to extend the gesture to prison inmates during every Christmas and easter period, noting that because of the incursion of the second wave of COVID-19, reaching out to the prison inmates was difficult.

Mamza said because of the challenge, he decided to forward such gesture to 200 PLWD in the state in order to make them have some sense of belonging during the festive period.

The Bishop noted that his intension was initially to provide food items to them but he changed his mind in consideration of the fact that some of them might be on special diet as such he commuted the gesture to cash.

It was observed that the beneficiaries included both the Muslim and Christian members of the PLWD.

The CAN Chairman has established a reputation for assisting both members of Christian and Muslim communities, especially at the peak of the Boko Haram crisis when the Saint Theresa Catholic Church hosted hundreds of IDPs.

Appreciating the gesture on behalf of PLWD, Godiya Simon thanked the CAN chairman saying that his gesture would go a long way in bringing succor to them.

She prayed God to bless him exponentially for his unprecedented spiritedness and love for the less privileged.