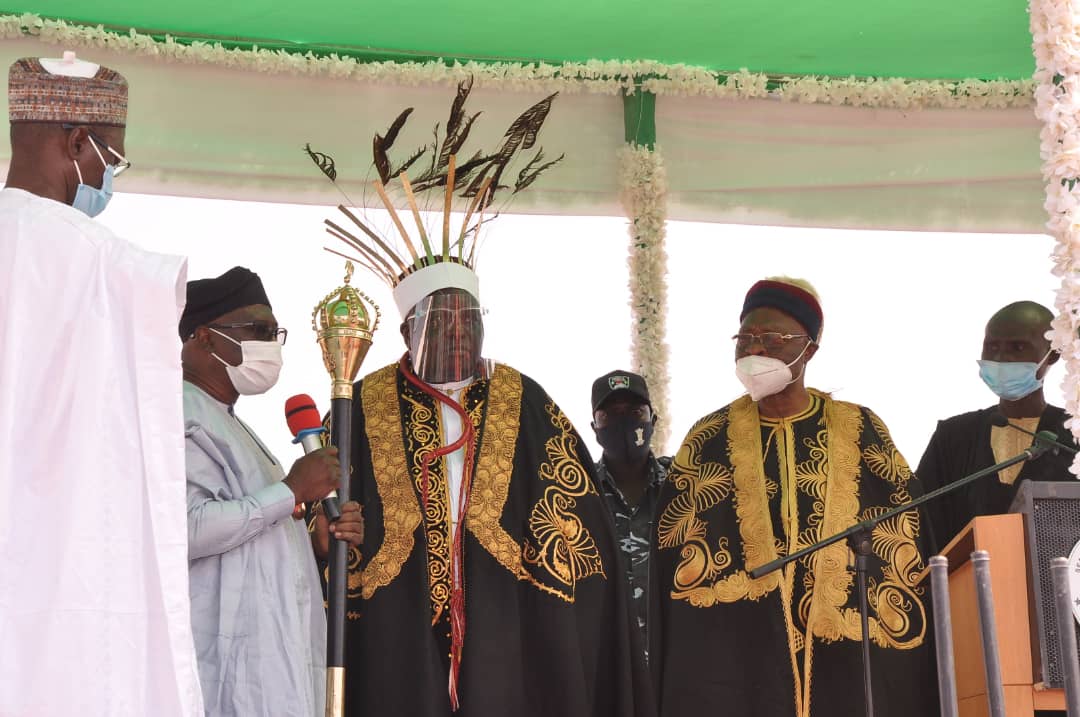 * No community or society can claim to truly develop while avoiding or refusing to accommodate others, and without embracing diversity and inclusiveness. There is power in diversity and I believe in this power – Hama Bachama

Fintiri commended the kingmakers for ensuring a hitch free selection process and for selecting one of the best nominees.

Fintiri commended the four who joined in the race to the chieftaincy for accepting the fate in good faith. He urged them to sustain the tempo for the overall development of the chiefdom.

Fintiri pledged his government’s support and commitment towards building eternal peace through the enthronement of justice and rule of law.

In his acceptance speech, the Hama Bachama who thanked the governor for his support and spiritedness towards the Bachama nation, pledged to work in synergy with the government to ensure eternal peace and security in the chiefdom battered by antagonism and mutual suspicions occasioned by ethno-religious conflicts

“It is important that I clarify some misconceptions and outright lies if only to disabuse the minds of everyone who lives in our kingdom but who is not of the kingdom.

”I have heard the lies and mischief being spread around that the Bachama kingdom plans to flush out all herdsmen and non-indegenous persons from the Kingdom.

“This failed effort at blackmailing the kingdom is, to say the least, malicious, self-serving and pedestrian. And like other lies before it, this one too shall fail.

“No community or society can claim to truly develop while avoiding or refusing to accommodate others, and without embracing diversity and inclusiveness. There is power in diversity and I believe in this power.

“The United States of America is what it is today because long ago, she understood and took advantage of diversity to harness the very best of human resources from all parts of the world who worked to build and develop America.

”We have enjoyed relative peace and quite for sometime now because of the strategy of continuous engagement and dialogue adopted by the state government.

“Our kingdom will therefore continue to support every peace initiative to implement solutions and strategies agreed upon until we are able to stabilise and to enjoy sustainable peace,” he said.

The new monarch who is the 29th Hama Bachama was appointed on July 27, 2020 a week after the death of the immediate past Hama Bachama, Honest Irmiya Stephen, (Kwire Mana Kpafrato II).

“This is the Kind of development that the monarchy in Jalingo-Maiha ought to have celebrated but is to this day, frustrated with empty palace; over 7 years after the death of their monarch, over 2 years with the High Court judgement that ordered the governor to approve the appointment of the Emirate Council selected and recommended and 89 days today with the determination of the Appeal Court that affirmed the High Court judgement; an ugly development that the monarchies must join in fighting against, lest it is left to mature enough to consume every emirate and chiefdom,” Yunusa Abubakar, a lecturer, literary critic and critical thinker would say.