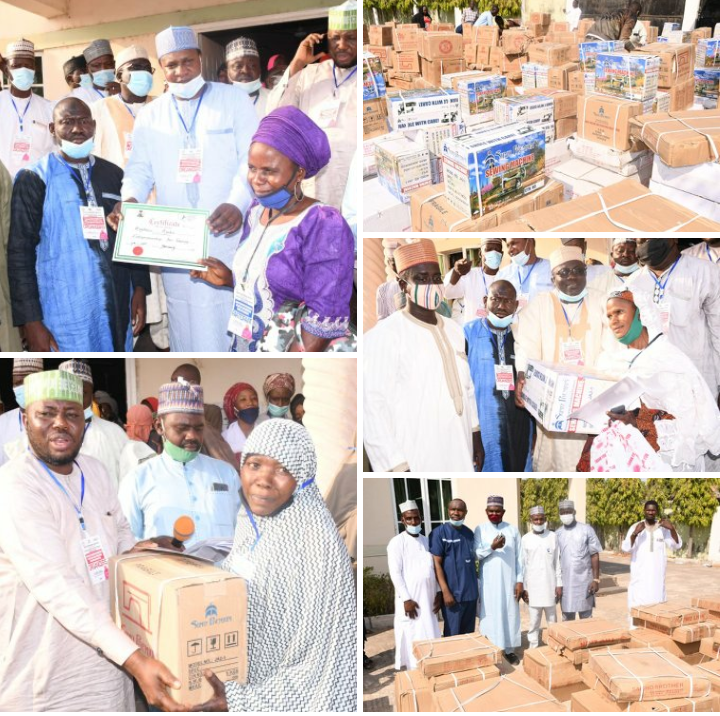 The Senator representing Adamawa Central Senatorial zone, Aishah Dahiru Ahmed, popularly known as Binani in her continuing constituents empowerment programmes has provided succour to 406 Women cut across the constituency she represents, with a view to ameliorating the hardship faced as a result of Post Covid-19 economic challenges,

Represented by the wife of late Chief of Staff Adamawa state, Hajj. Aishatu Abdulrahman Abba Jimeta, Sen. Binani distributed 406 sewing machines to the beneficiaries and urged them to ensure judicious use of it.

Presenting the items, the Adamawa state APC acting Chairman, Alh. Ibrahim Bilal lauded Sen Binani for making APC proud at the state. He said “as the only APC Senator from Adamawa we are very proud to call you our own, especially with this empowerment coming again in less than two weeks after the last mega empowerment in the history of Adamawa and Nigeria as a whole, which empowered more than 1667 People.”

Amb. Kevin Peter, Garkuwan Fali, commended the Senator for representing Adamawa Central and the APC well, where he said “this is almost the sixth time I am being invited to attend the empowerments programme by Sen. Binani. We don’t need any soothsayer to tell us that she is a great asset to APC and Adamawa state. I therefore assured her of our maximum support whenever and wherever the need arises”

Appreciating, the beneficiaries have jointly thanked Sen Binani for the empowerment, assuring that they would put the sewing machines to good use.

Also in attendance include; APC caretaker Chairmen of the seven local government in the central zone, some state executives of the APC caretaker committee, Alh. Bala Jingi Chairman Binani structure among others.