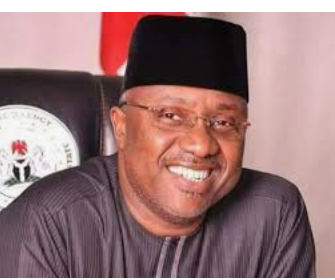 No! Bindow is not Judas but a Messiah of a sort.

This can be seen and felt by his presence in Adamawa State where thousands of individuals and groups came out enmass to welcome him, paid their allegiance and even went out of their ways to threaten him with legal actions if he failed to seek for re-election in 2023.

Though I understand the feelings and insecurity exhibited by those who take politics as do or die affairs, paying faceless writers to malign His Excellency, Distinguished Senator Muhammad Jibrilla Bindow is not the best way to carve a niche because it will never take away his goodwill and wide acceptance across Adamawa and Nigeria.

Therefore, his call for healthy opposition and decorum in an already overheated political landscape of Adamawa while visiting the party Secretariat should not be mistaken for drumming up electoral support for PDP or Fintiri who came to power through internal crisis harboured by some APC stakeholders that led to anti Party activities; series of betrayals, blackmails, envy and hatred for a man who choose to put Adamawa on a global map as the fastest developing state in Nigeria than serving the interest of some few vested interests.

Another point worthy of note is the fact that picking up leaders and taking a jibe at them because someone is eyeing the seat a leader occupies is an old fashion way to gain acceptance from the masses.

What is now obtainable in all the saner climes of the world is issue based politics where track records and what one has in store for the masses should be the rules rather than the exception and it is obvious that BINDOW has this traits and a formidable team that is made up of rigid structure from unit level to the exclusive national fora more than any potential occupant of Dougirei Government House.

All the Advisers that served Adamawa under his administration; all the PSAs, SSAs and Heads of Departments and Agencies as well as the entire political structure of APC that he helped to form in 2014 as the first elected political leader from Adamawa state to dump PDP and defect to APC.

Another issue raised by this faceless writer is the way he portrayed the relationship between Governor Ahmadu Fintiri and His Excellency Bindow as that of symbiotic relationship. This is not only a fallacy but an attempt to pitch Bindow against his political friends who has so much confidence and respect for him.

The goodwill he commands has also become a reason for envy from different individuals whom are still confused on why on earth Bindow’s name is being heard, seen and felt whenever issue of Adamawa is brought to the table?

Their frustrations can vividly be seen in the paid write-up by a pseudo name called Munnir Gidado whose choice of words and the use of gutter language to describe the political development of Adamawa state shows nothing but a clear case of desperation and motor park politics that is alien to us in Adamawa.

For goodness sake how can a mean man like Fintiri bankroll Bindow’s visit to traditional rulers that had hitherto established a good relationship with the former Governor even before he became a Senator of the Federal Republic of Nigeria?

Let us briefly X-ray the relationship between Bindow and the 4 Traditional Rulers he visited in order of the August Visit;

1. HRM Kwandi Nunguruya of Guyuk Traditional Council, this gentleman was in Israel for Pilgrimage for the first time in his life courtesy of His Excellency Senator Bindow and these are kind of gestures people hardly forget because it has to do with spiritual obligation.

Secondly, since his coronation as Kwandi, this is the first time Bindow will visit Adamawa hence the need for him to drive down to Guyuk to condole her people for the loss of their late Kwandi and at the same time congratulate their new chief whose relationship with Bindow predated his coronation.

2. HRH Amna Shelleng, it is on record that Bindow, while serving as a governor, presided his installation and the presentation of staff of office as Amna Shelleng and it is natural for this exemplary ruler to establish a very good relationship with Bindow with or without holding public office as long as both are alive. Secondly, the late district head of Shelleng is also personal friend to the former governor.

3. HRM Hama Bachama of Numan, though there is no records of any close relationship between Bindow and the new Hama Bachama; the late Hama Bachama was Bindow’s ally for more than 30 years and that is why he deliberately spent more time with the families of late Humon Honest at their private residence, especially with the mother of the deceased monarch than the time he spent at the palace congratulating the new Humon.

4. HRM Hama Bata’s Palace, Bindow’s visit to Hama Bata just like in the case of Numan is purely a home coming because Nzanyi are natural cousins to the Bwatiye people of Numan and Demsa local governments.

Secondly, the deceased Sardaunan Bata Chief Medan Teneke is one of the few people that motivated and encouraged Bindow to join politics and there is no need of any string for him to pay tribute to a worthy mentor. This he did by paying homage to Hama Bata who serves like a father and counselor.

In a nutshell, His Excellency Distinguished Senator Muhammad Umar Jibrilla Bindow has 101 reasons to visit these traditional institutions and he has the capacity, political will and is blessed with the financial muscles to do so even before joining the turbulence of politics.

Therefore, it is not only laughable but an insult on the part of Bindow to be bankrolled by a Governor who is now struggling to compete with the richest man in Madagali at acquiring useless properties through cutting corners and receiving kickbacks from local contractors.

On this note, I expected these mentally retarded armchair critics and Political pundits to appreciate Bindow for bringing sanity in the polity, especially on the part of reformed APC, which obviously attracted notable politicians to return back to the party and not to launch a campaign of calumny against him just because he restrained himself from desecrating the office he once occupied.

Besides, what will he gain from picking an unnecessary fight with governor Fintiri who is his junior brother by age and a friend by association?

It is still on records that Fintiri has always respected Bindow from time immemorial and never for once attacked or call him out without courtesy since assumption of office on 29th May, 2019.

Moreover, if Bindow will have to respond to political statements made against him or his administration, what made him different from political rogues who mistook political office as an avenue for vendetta and oppression?

Therefore, respect is reciprocal and this is exactly the robust relationship Bindow and Fintiri enjoy.

Finally, the earlier we do away with this politics of pull him down syndrome, the better for APC and Adamawa State in general because whether we like it or not and to the glory of God, there is no other determining factor of who should be Adamawa’s Governor in 2023 than Bindow because of his acceptability, solid Political structure, Political war chest and huge resources at his disposal.