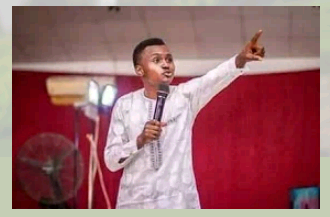 The fire is not on the mountain, to be running round and around, the fire, without extinguisher, is fearfully heading to consume the embattled Pastor of Fire House Revival Ministry, Marwa Tumba, whose prayer on the pulpit was not any near pleasing to moralise, even religiously lacking spirituality, his alleged pastoral uncalled for mischievous escaped, away from the puritanical calling, as much as his judicial prayer, a certain Evangelist would consider unlawful, would have to face rejection at the Criminal Area Court II in Yola, Adamawa state, northeast Nigeria.

The News Platform would online report that the embattled Pastor Marwa Tumba who ought to use his Fire House Revival Ministry as a calling to quench the evangelical fire lighted from the fusion and friction between the Male pastor and the female evangelist to have been engaged in a justified procreation contract, has through his Counsel, E. O. Odo asked the court to hold that the he has no any criminal case to answer, based on what he considered as unfounded allegations, lacking credible evidence to warrant any charges labelled, if not for libel against him.

Pastor Marwa Tumba evangelised theology in the courtroom, away from the pulpit, was that the testimonies presented by Evangelist Kwanye Tumba, have not established any ground to justify any of the offences under sections 302, 377 and 370 of the penal code law as charged.

Pastor Marwa Tumba as the media has been following, has been standing trial before Honourable Nuhu Musa Garta led Criminal Area Court over criminal breach of trust, marriage deception, and defamation of character.

Pastor Marwa Tumba 28 was alleged to have defrauded his seeming erstwhile, rather evangelical girlfriend, Evangelist Kwanye Tumba 33, whom he deceived with a marriage proposal, to squander her wealth as though unGodly ‘yahoo boy’ that resulted in frustrating her life to squalor, near depression, if not for the revered Almighty Divinity she has faithfully submitted to.

It was previously pointed out that Pastor Marwa Tumba was alleged to have lured his victim of infatuated rather deceptive love, Evangelist Kwanye Tumba, to surrender her house for a marriage seeming mirage, only to dump her after squandering her wealth would have been used for the wedding.

The Evangelist girlfriend whose parents considered as disappointment for failing to present their son-in-law pastor as arranged, was subjected to living a life of the squalor in an uncompleted building at Yolde Pate, Yola South local government area of the state, selling vegetables to survive.

Evangelist Kwanye Tumba filed the case before the Criminal Court against the man of God, for what appeared to be a ghost marriage, demanding for the recovery of her wealth, squandered squandered by her fantastically ghost husband.

In the evidence she tendered, the Evangelist alleged that she sold her house at the sum of N500,000, and deposited the sum of N50,000 directly into the bank account of her suitor pastor constituting her tithe, adding that she has also supported the activities of the ministry financially, clearly to fuel the bond between the would be husband and wife.

The Evangelist tendered the bank teller, list of items for the proposed marriage and evidence of how and where their relationship started after a prayer meeting at Yolde-Pate, a suburb of Yola South Local Government Area and subsequently admitted in evidence.

The evangelist claimed by deceptive love, informed the court that all through the period of their relationship, the pastor kept assuring her that he would marry her as a result of which she was very opened to him and gave him access to everything almost like his wife, unknown to her that it was to yahoo her wealth, her body and her life for love.

The Court presided over by Honourable Nuhu Musa Garta held that the pastor has a criminal case to answer.

The pastor alleged deceitful suitor was charged for the offences of criminal breach of trust, deceitful marriage and defamation of character.

The court has therefore, dismissed totally, the 6 page no case submission filed by the defence counsel, holding that the defendant must stand trial.

Hearing was adjourned to February 24, 2021 for Pastor Marwa Tumba to open his defence as he pleaded not guilty.