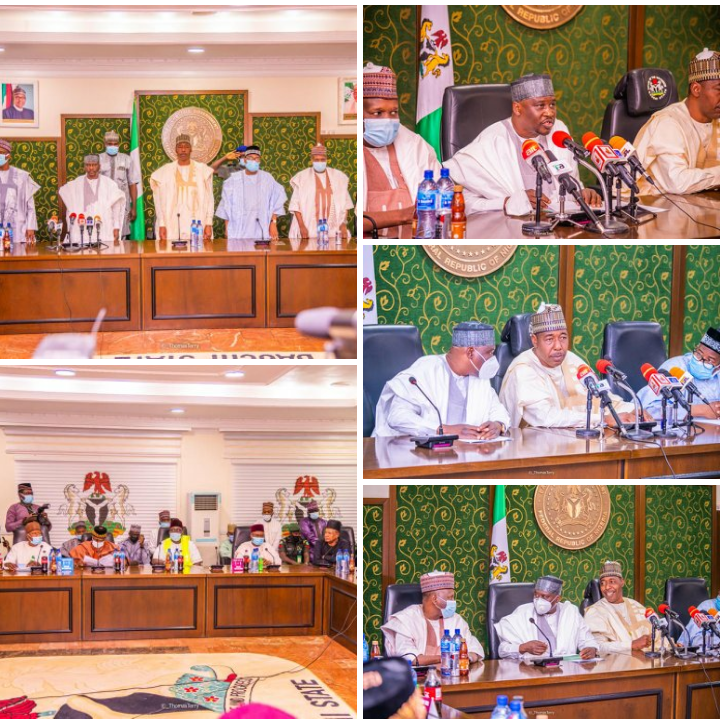 GovernorsBabagana Zulum of Borno Chairman of the forum, Rt. Hon Ahmadu Umaru Fintiri of Adamawa Vice Chairman, Gombe’s Inuwa Yahaya and host Senator Bala Mohammed were in attendance, while the Deputy Governors of Yobe and Taraba represented their Governors.

Rising from their 4th meeting, the Governors resolved to set up a Joint Task Force to ensure the protection of Schools in the region in view of the disturbing problem of school abductions.

While appreciating the reinforced efforts in the fight against insecurity, the Governors however supported the idea of community policing to compliment the efforts of security agencies towards addressing security challenges.

Governor Ahmadu Umaru Fintiri Vice Chair of the North East region Governors Meeting who presented the communique said the Governors who noted the need to be aggressive in repositioning education in the sub-region therefore agreed to establish a Council on Education with the mandate to improve quality and performance, as well as set up a peer review mechanism.

It also raised concerns on what it described as being shortchanged in capital appropriation in the 2021 budget knowing fully well the precarious situation of the region would require aggressive infrastructure intervention to defeat insurgency and build the resilience of the affected communities.

The forum however commended the selection of some roads in the sub-region to benefit from the Presidential Executive Order 07, but was quick to advise that Governments of the sub-region be consulted.

The meeting disclosed that the Bauchi forum which had discussions with the British High Commissioner to Nigeria and the Great Green Wall resolved to work with the UK Government on beneficial areas without compromising the sovereignty of the federal Government, while it appealed to the Great Green Wall to develop a framework for regional and State partnership for maximum impact.

While reiterating support to the North East Development Commission, the Governors urged the Agency to fast track the process of developing a master plan for its activities and cooperate with States in closing the needs gap.

It also considered the prospects of oil exploration in the region and resolved to have specialised institutions to provide the required local content and commended Bauchi and Gombe states for taking the lead in establishing Oil and Gas Academy for human capital development.

The meeting also express disappointment with the pace of work on a critical infrastructure like the Mambilla hydroelectric power project, which according to the forum, only existed on paper.

The meeting urged the federal Government to show the desired seriousness in view of its anticipated impact in turning around the fortunes of the sub-region and the country at large.

The next meeting of the North East Governors Forum would hold in Jalingo, Taraba State capital on 2nd June, 2021.