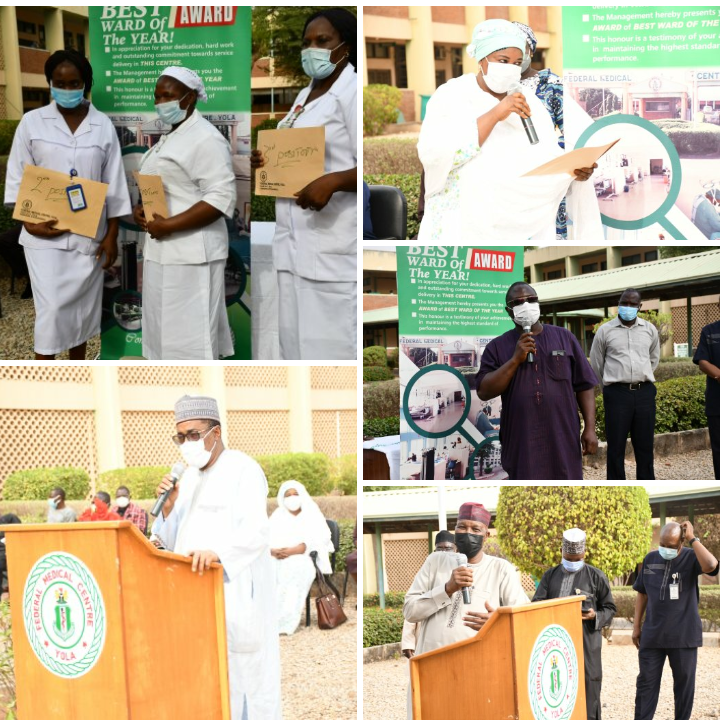 As part of staff motivation and with a view to ensure effective and efficient service delivery in FMC Yola, Prof. Auwal Muhammad Abubakar the Medical Director has, about six years ago, introduced the wards assessment exercise.

The exercise is to be able to identify and award the best performing wards of the month and eventually, of the year.

The assessments are based on cleanliness, proper management and maintainance of hospital equipments and human relations, which involved relationship with patients and level of cordiality between and among co-workers.

The best performing wards of the month for the first, the second and the third positions are given the sum of N30,000, N20,000 and N10,000 respectively, in addition to the plaque presented to the first position as the best of the rest.

The MD FMC Yola has commended the performances of the entire 15 wards of the Centre for passing the assessments with excellent grades.

Prof. Auwal acknowledged the competition without bitterness whereby no ward is allowed by the competing wards to maintain the first position rather repeatedly.

Prof. Auwal, having thanked the board members and the management of the hospital, commended the accreditation committee from the West African College of Surgeons, led Prof Ibrahim Adamu Yakasai of the Department of Obstetrics and Gynaecology, Bayero University, Kano, for participating in the award ceremony.

The committee has visited the Centre for the accreditation of the Department of Obstetrics and Gynaecology.

In her address, the board chairman of the hospital, Hajiya Habiba Umar said FMC Yola “is the cleanest and neatest hospital in the country”.

Mrs Umar, having appreciated the presence and contribution of the accreditation committee, congratulated the nurses of the hospital for the wonderful performances; keeping the wards tidy and providing effective and efficient patients care in tune with the quality assurance.

The board chairman commended the medical director for initiating the ward assesment exercise and the management and staff of the hospital for the support in nurturing the initiative.

In his remarks, Prof Yakasai, having explained the purpose of the accreditation committee’s visit to the hospital, thanked the management of the hospital for the cooperation and hospitality accorded the committee. He also commended the nurses for the impressive performance and the hospital for maintaining standard.

West African College of Surgeons WACS, is a professional organization that promotes education, training, examinations and research in surgery in Africa. WACS is the first organisation to organise surgical subspecialty training in the region.

Below is the list of the positions from first to fifteenth