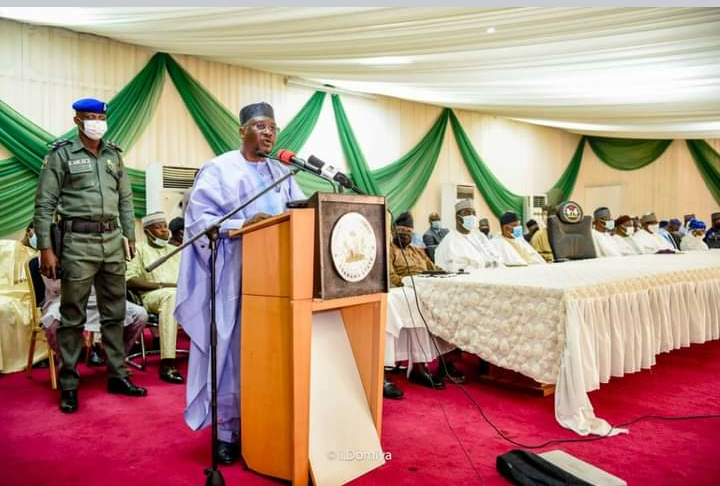 * Doesn’t it amount to an act of backwardness, translating to youth restiveness the indefinite suspension of skills acquisition, other welfare scheme with the unlawful impeachment of Nyako?

* Where is the stability, the fairness in the administration taking side with injustice by dishonoring courts orders as relates to the district headship of Jalingo-Maiha?

* Is the over N5b loan collected within Fintiri’s three acting months part of the loans he said he inherited?

* Doesn’t Fintiri collect loans in less than two years more than his predecessors? Why adding more to the suffocating loans inherited?

Governor Ahmadu Umaru Fintiri of Adamawa state was not to have ovation without response for blaming the past governors of what he considered as backwardness of the state, glorifying himself as the seeming messiah meant to get the state out of the maze with the popular mandate.

Fintiri has scored his administration high, saying that despite financial crunch, COVID-19 scourge and insecurity, he was able to give a robust account of his stewardship in the last two years.

Fintiri who made the position during stakeholders meeting at government house Yola Wednesday, where he gave detailed account of his stewardship, accused past administrations for the decay in all facets of the economy in the state.

“Distinguished stakeholders, I have taken the pain to take us through some of these gloomy indicators so that you can have a mental picture of the situation at hand when we took over.

”I am not lamenting. Far from it. I do know, these are pitiably extraordinary problems created by the wrong people in leadership.

“And your collective anger that you require a true leader to turn the fortunes of the state for the better was the result that brought me on board.

”The sure way to thank you for this decision is to periodically give you a detailed breakdown of what we are doing to reverse the ugly narrative. Where we are now,” he said.

”We met a state that was virtually devastated in all ramifications, requiring more than ordinary ingenuity to patch and revamp. Conscious of the task at hand, we went all out, dared distractions and subdued impossibilities.

“Today, the ugly narrative is fast reversing, Adamawa State is changing and our people are happier. This fact is admitted even by our fanatic antagonists.

”We inherited a socially destabilized society with a disenchanted citizenry who lived in constant fear of losing their lives, livelihood and properties; general loss of trust, attendant upon by ethnic and religious suspicions and intolerance was brewing among our plural nationalities.

”Absence of justice and fairness has instituted a culture of identity politics, which was negatively taking its toll on our people.

“Perennial farmer-herder conflicts, was claiming lives, herds, farm produce and even settlements of our people.

”The situation was so bad that no community in Adamawa state can claim freedom from it; kidnappings and unrestrained urban crimes such as the activities of ‘Shila-Boys cult went on brazenly as if there was no constituted authority to contain them.

“The northern zone, which was just recuperating from the attacks of the dreaded Bokoharam insurgents were practically abandoned to their faith with most of them converting the emergency IDP camps into a permanent abode with no hope of return to their ancestral homes.

”The state was sliding into anarchy with no demonstrated authoritative commitment to sanity and control,” he said.

The governor who decried the state IGR when he took over said despite the daunting challenges, he was able to restore sanity to the once battered state economy.

”In 2018, the annual IGR of Adamawa State was about 6 Billion. This was considered paltry in this age where every state is deploying all its arsenal to transit to self-reliance and sustainability.

“We inherited a suffocating N140-Billion debt burden, which we had to service every month from the Federal Allocation. As if this was not bad enough, there was standing monthly overdraft line to pay salaries provided by commercial banks that chocks. This has led to budget indiscipline and non-compliance with
extant appropriation laws,” he said.

Commenting, Alh. Ahmed Lawal, a key stakeholder, former APC state spokesman and current Acting State Organising Secretary of the party would want to be clear about Fintiri’s accusation. “Was the governor blaming the immediate past leadership or the entire past governors?

If Fintiri was blaming the entire past governors for the backwardness of the state, did he include his administration in acting capacity with the unlawful impeachment of governor Murtala Hammanyero Nyako?

“Fintiri needs to be reminded how in less than three months as acting governor, he was claimed by the same decay he was blaming or even worse, by piling over N5 billion as debts, spending huge sums for purchase of vehicles and office renovation for himself and state officials in addition to diverting monies meant for a school project, as media have critically and constructively investigated.

“Recall that governor Nyako left a balance of N1, 957, 045, 82 in the state government project account with the Yola branch of Zenith Bank

“Details of some of the transaction in the account showed that over N497 million was meant for the construction of a Faculty of Law complex at the Adamawa State University, ADSU Mubi.

“Records revealed that as acting governor, Fintiri authorised the release of N1.9 billion from the projects account to the state Ministry of Works on August 27, 2014, which was eventually diverted

“State sources and available documents, the media would adequately report, suggested that the governor might have used the diverted funds for fraudulent contracts and for himself.

“Don’t these contribute to the backwardness of the state?

“Fintiri has within three months as acting governor cancelled the skills acquisition training programmes initiated by the Nyako led government, which was nationally applauded along with the social welfare scheme.

“With the skills acquisition training and the social welfare scheme, youths would have been more engaged in entrepreneurship and being employable in different companies like Dangote group of companies among others have done. There couldn’t have been the shilla criminality he was blaming on the previous administration, could there?

It is on record that former governor Umaru Jibrilla has within one year built more roads cut across the state than what governor Fintiri is priding himself as messiah has and is doing.

When you talk about peace, tolerance and mutual coexistence, non of the previous governors have ever threatened to extinguish free press and freedom of expression. They were all opened to criticisms and tolerant to even the unconstructive, libellous and biases.

“It was Boni who established Adamawa State University in Mubi, the first in the northeast and before now, one of the best in the country.

“It was Boni who completed the abandoned projects started by governor Abubakar Barde of blessed memory in the defunct Gongola state; state secretariat and state house of assembly.

“Teachers in secondary school were able to own a car of their own during Boni led government; it used to be an impossible feat as it is presently.

“Adamawa State Universal Basic Education Board used to be the best in the country during Boni and Nyako administrations.

“Adamawa State Primary Health Care Development Agency established during Nyako led government used to be the best in the country, before now.

“State Polytechnic Yola seemed to be a glorified secondary school before Nyako led government with not more than three programmes passed through accreditation along with the college of nursing and midwifery, Yola. The list is endless.

“Are these the kind of backwardness? It is expected that people or organisations should be those to assess performance rather than self-assessment as governor Fintiri has succeeded in doing.

“According to the governor, ‘we inherited a suffocating N140-Billion debt burden’, is it really suffocating? Would you have had the ground for another loans you’ve collected not to improve healthcare delivery that is dysfunctional, not to improve education to have kept the youths away from criminality, not to bring tap water to every house from the nearby River Benue not from Dadin Kowa as Gombe governor has done rather blameless, but to build flyovers at a time they aren’t necessary?”

Saad Bello, a sympathiser to the opposition added a poser, “is there injustice, than a governor, based on perceived sentiment, to fall on the side with the undeserved, to dishonour the courts orders, over seven months after appeal court determination as relates the approval of the appointment of district head of Jalingo-Maiha district, Maiha local government of Adamawa state?

“Hardly would either Sale Michika, Boni Haruna or Murtala Nyako submit to such backwardness against justice”.